Feedback
Previous How Kids Learn to Write, And How to Help Them Do It Next Vote For The Best Slang Word In English: March Madness Round Three Is Open!

Let’s face it: There’s never a bad time to educate your kids on some of the classic movies from “the good old days.” Yes, we are talking about ’80s movies, films made back when everything was gnarly, and you steered clear of anything that seemed bogus.

Want to add an extra dash of education into the mix? We’ve got you!

Introducing part two of the Dictionary.com Movie Word Challenge: Bingo time! We’ve put together a vocabulary guide to make all the extra screen time into learning time, and we’ve added some Bingo cards you can print out (or just pull up on your phone) to help make these new words stick!

Here’s what you need to do:

When you’re getting a job with a ghostbusting outfit, you’re bound to learn a few new words. Tell your kids to pay close attention to Winston’s job interview in Ghostbusters. They’re about to learn something.

First up is clairvoyance, a word that means the supernatural power of seeing objects or actions removed in space or time from natural viewing.

Another new word: telekinetic. This adjective form of the word telekinesis refers to the purported ability to move or deform inanimate objects, like metal spoons, through mental processes.

What is an arcade? Today’s kids probably don’t now much about this word which means “an establishment, public area, etc., containing games of a mechanical and electronic type, as pinball and video games, that can be played by a customer for a fee.” Ironically, the movie makes reference to arcades as if they’re something new-fangled that kids use in place of books. Sound familiar?

Another fun word to learn in the world of Falkor and Atreyu is winch, the crank or handle of a revolving machine. 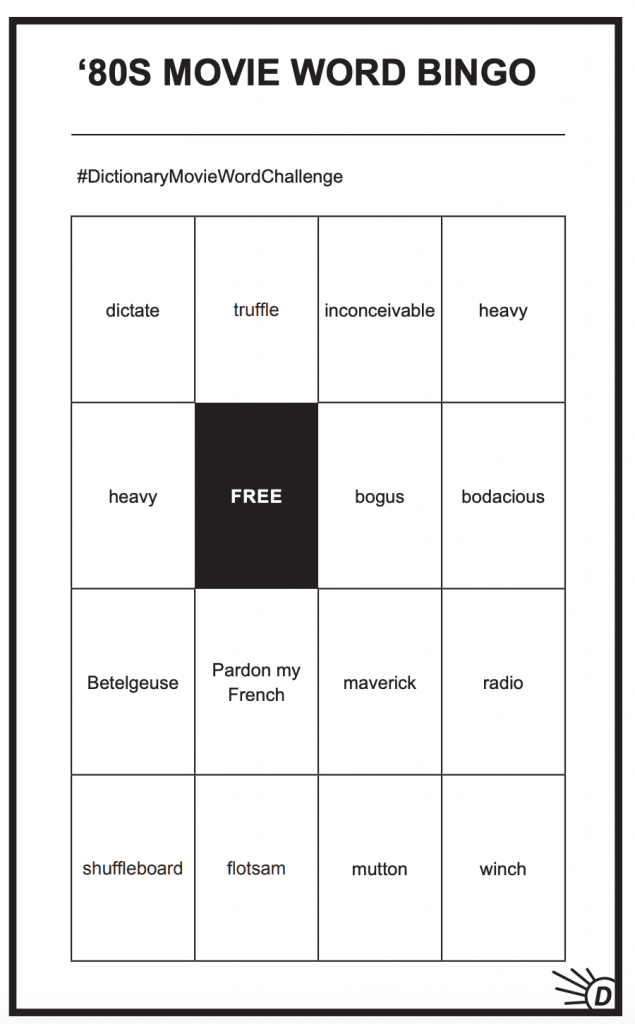 The Goonies never say “die,” but they do say plenty of words that may have your kids shaking their heads and running for Dictionary.com. This film about a band of kids trying to save their community from some greedy developers may be best known for the truffle shuffle, a sort of belly dance performed by a character who goes by the name Chunk.

But what’s a truffle, your kids might ask? It’s a delicious (and expensive) fungi — often used in expensive restaurants. Truffle can also be the name of a candy made of soft chocolate, shaped into a ball and dusted with cocoa, or sometimes a three-layered cube of light and dark chocolate.

Another word to keep an ear out for in The Goonies? Dictate. It means to say or read aloud something meant to be written down or recorded.

An ’80s movie list without The Princess Bride? That would be inconceivable! This word is hotly debated in the movie, with character Inigo Montoya dropping the classic phrase, “You keep using that word. I do not think it means what you think it means,” in response to his boss Vizzini saying something is “inconceivable.”

So what does it mean? When something is inconceivable, it’s unimaginable.

Our second Princess Bride term may pass kids by if they aren’t listening hard enough: mutton. Referenced in a line about a mutton, lettuce, and tomato sandwich (alas, they don’t eat bacon in Florin), mutton is the flesh of sheep, especially full-grown or more mature sheep, used as food.

Get More Dictionary.com: Dude, These Terms Were Totally Popularized By Generation X

Back to the Future

Heavy is a pretty familiar word, and most kids know it means something that’s of great weight, likely something hard to lift. But back in the ’80s, heavy was also a slang term that could mean something was serious or important. You’ll hear Back to the Future‘s Marty McFly call things “heavy!”

Doc Brown needed 1.21 gigawatts to power his Delorean for time travel. Blasting through dimensions in a car with wing doors may not be real, but gigawatts are! The word means “one billion watts.”

Bogus can mean not genuine, counterfeit, or spurious. But get ready for a little lesson in totally tubular ’80s words. Back in the days of stirrup pants and Bill and Ted taking excellent adventures, bogus meant “ignorant; not up-to-date; unattractive; lame, square.”

This movie also offers up another bit of  ’80s slang: Bodacious. The word means outstanding.

Beetlejuice isn’t just the name of the main character in this Michael Keaton movie. With a slightly different spelling—Betelgeuse—you’ve got the name of a red supergiant star!

For kids who were born well after the Y2K scare, the word millennium may be another new one for their vocabulary. It means a period of 1,000 years.

Why would Ferris Bueller say, “Pardon my French” when he’s speaking English? This apology often used after a profanity has a link to the French language: the word pardon comes from the French pardoner.

Ferris is very insistent that he does not believe in any ism. So what’s an ism? This noun means a distinctive doctrine, theory, system, or practice.

Top Gun may or may not return to theaters in 2020, but nothing will ever beat the 1980s classic, will it? Introduce your kids to Maverick, and teach them that lowercase maverick means “a person pursuing rebellious, even potentially disruptive, policies or ideas.” Suddenly the character’s name makes so much sense, doesn’t it?

And who can forget Goose, Maverick’s wingman. What does wingman mean, you ask? Well, it’s the pilot in a plane that flies just outside and behind the right wing of the leading aircraft, in order to provide protective support.

Want to get social from a safe distance? Share your completed Bingo cards on social media, and tag @dictionarycom so we can see how it’s going! Use hashtag #DictionaryMovieWordChallenge to connect to other families!

Are you ready for a blast from the past? The Karate Kid features the word radio, a mystical object to today’s kids best described as an apparatus for receiving or transmitting music or messages such as the news.

They may also ask why Mr. Miyagi refers to Daniel as Daniel-san. –San is a suffix used in Japanese as a term of respect after names or titles.

Andie and Duckie are a classic introduction to the John Hughes oeuvre, and they can help introduce your kids to a few new words, too.

Try starting with touché, an expression used for acknowledging a telling remark or rejoinder.

Follow up with an explanation that people used to call the bathroom a powder room.

Back before wireless chargers and USB cords, toys and gadgets used to come with batteries … sometimes.

Pull up this kooky classic and introduce the kids to the concept of shuffleboard, a game in which standing players shove or push wooden or plastic disks with a long cue toward numbered scoring sections marked on a floor or deck.

They can also keep their ears out for flotsam, or the part of the wreckage of a ship and its cargo found floating on the water.

Need more fun for the whole family? Take a word journey to the aquarium from the couch!

Previous How Kids Learn to Write, And How to Help Them Do It Next Vote For The Best Slang Word In English: March Madness Round Three Is Open!
RELATED POSTS