Previous Inconceivable! Play '80s Movie Word Bingo Next Is The Coronavirus A Plague?

It’s time to vote on round three of our slang competition at Dictionary.com!

There’s no basketball on television, but March Madness has continued safely here at Dictionary.com. We’ve been asking you to vote your way through a bracket while you’re hunkered down at home, and you’ve let us know in no uncertain terms that it was time for some words to go!

Take the match-up between low-key and drip. Drip has dripped away after a complete blow-out. We also saw slay get slayed by the behemoth that is the struggle is real.

This week, we’re asking you to vote on Dictionary.com’s Sweet Sixteen! As a reminder, your job is to choose your favorite word in each pairing in the poll below. 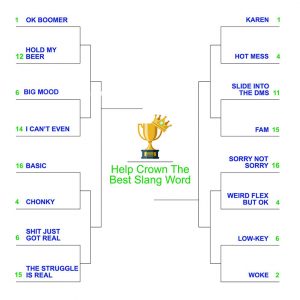