What does Bad Luck Brian mean?

Bad Luck Brian is a meme featuring a teenage boy in a sweater vest showing off a goofy grin with braces. The text on the image describes various unfortunate, unlucky, embarrassing, and hilarious circumstances.

Where does Bad Luck Brian come from? 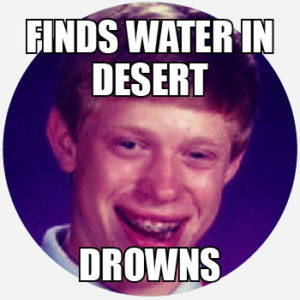 The original Bad Luck Brian meme was posted to Reddit in the subreddit /r/AdviceAnimals on January 23, 2012. It reads “Takes driving test. Gets first DUI.” It received some attention, but later on the same day, a significantly more popular Bad Luck Brian meme was posted. It reads: “Fart in class. Shits.” Redditors enjoyed the meme, and by 2017 the second version had over 1,000 upvotes. 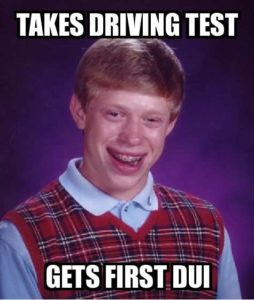 The meme began to take off when Redditor Very_Juicy posted a new meme to /r/AdviceAnimals on March 12, 2012. This one reads: “Falls asleep in class. Wet dream.” It was so well-liked, that this same image was reposted to the image sharing site 9gag, where it got over 40,000 points within one day. By 2017, the post had over 55,000 points. Within a few weeks, compilations of Brian memes popped up on BuzzFeed and Funny or Die. It also spread to FunnyJunk, Tumblr, and continued to grow in its homebase, /r/AdviceAnimals. 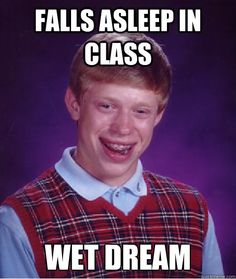 After the meme had been around for about a year, Brian’s identity was revealed to be a person named Kyle Craven in a Reddit AMA (Ask Me Anything) on May 8, 2013. He encouraged the sharing of his image. A Washington Post article, “Being Bad Luck Brian: When the meme that made you famous starts to fade away” revealed his full name, and that, as it turns out, his long-time friend Ian Davies was the one who originally posted the very first image to /r/AdviceAnimals. Davies says that he decided to call it Bad Luck Brian because it sounded catchier than Bad Luck Kyle. In 2015, Craven estimated that he had made between $15,000 and $20,000 from licensing fees and merchandize related to Bad Luck Brian.

The man, the myth, the legend himself. @KSUAlumni Kyle Craven aka Bad Luck Brian (@solidbadluck) pic.twitter.com/nwSw83Y1qp

The original photo in the meme was taken for picture day in Craven’s junior year of high school, but never made it into the yearbook. The principal of his school made him retake it. Craven admitted that the ridiculousness of the image in the meme was intentional and that he purchased the sweater vest specifically for that stunt. It was part of his persona in school, always trying to get a laugh out of his classmates.

On July 21, 2013, Craven created his own YouTube channel to bring the meme to life. His channel includes videos of him acting out some of the more popular iterations of the memes. He also created Bad Luck Brian accounts on Facebook, Twitter, and Instagram. 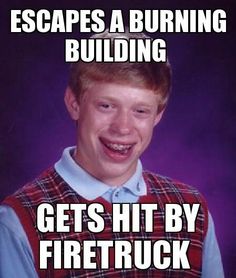 Like other memes, Bad Luck Brian tells a humorous story in a handful of words. Many of these stories focus on occurrences that the creators imagine could happen to a character like Bad Luck Brian if he were real. Some of these contain a kernel of truth that may have actually happened to whoever created a given iteration of the meme. In any case, Bad Luck Brian is used to describe embarrassing or unfortunate situations, often involving sexuality, bodily fluids, and negative social interactions.

This is not meant to be a formal definition of Bad Luck Brian like most terms we define on Dictionary.com, but is rather an informal word summary that hopefully touches upon the key aspects of the meaning and usage of Bad Luck Brian that will help our users expand their word mastery.