What does bah humbug mean?

Bah humbug is an exclamation that conveys curmudgeonly displeasure. The phrase is most famously used by Ebenezer Scrooge, the main character in Charles Dickens’s A Christmas Carol (1843).

Where does Bah humbug come from? 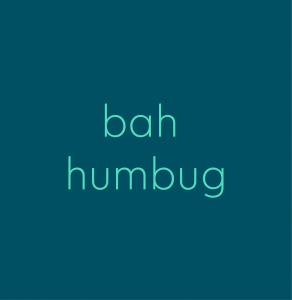 The origin of the word humbug is unknown, though it is clear that it emerged in mid-18th century England. The first known use of humbug in print was in 1751 in The Student, or the Oxford and Cambridge Monthly Miscellany, which calls the term “a word very much in vogue with the people of taste and fashion.” The Universal Jester: Or, a Pocket Companion for the Wits by Ferdinando Killigrew is another early example (1754): “merry conceits, facetious drolleries, &c., clenchers, closers, closures, bon-mots and humbugs.” In the original sense from both these early sources, a humbug was a “trick” or a “hoax.”

Humbug’s sense of “deceit” associated it with “nonsense” and “bother” by the early 19th century, when Dickens was writing. With the publication of his A Christmas Carol in 1843, the most popular phrase including the word humbug became the exclamation Bah! Humbug!, the catchphrase of the miserly main character Ebenezer Scrooge.

Scrooge’s bah is an exclamation of contempt or annoyance. Since then, bah humbug has come to invoke Scrooge’s (initial) grouchy attitude toward Christmas in other contexts.

I know today is #SuperBowlSunday & I also know the Eagles are in it but I HATE SPORTS! & I'll be happy when it's all over. There I said it!! Bah Humbug! 🙃
@valsvet86, February 4, 2018
Those who don’t get it baffle me. There’s a kind of bah, humbug to their criticism: ‘Don’t put dance numbers at the end of movies,’ they say. ‘It’s manipulative!’ Oh, to hell with you!
Lynda Obst, The Atlantic, February 21, 2009

Today, because bah humbug is so well-recognized as Scrooge’s cranky exclamation, people use the term knowing that its message of anti-holiday cheer is widely understood, with humbug itself becoming a synonym for a curmudgeon. The expression enjoys a variety of allusive use across speech and writing, especially during the Christmas season.

People use bah humbug to bemoan the elements of popular holidays, events, or cheery situations they don’t like (or grudgingly come to enjoy), often implying that they’re older than the celebrants. Bah humbug is also issued as an interjection to reject an idea, especially during the Christmas holiday season.

Users sometimes extend bah humbug as a verb, to bah humbug, colloquially “to pour cold water on something,” “to complain one’s way through some experience,” or “to be treated with cold stinginess.” Such attitudes are sometimes called bah humbuggery. (Humbug and humbuggery were similarly extended in the past.)

Confession that may make U hate me: my yearly ambition is to ignore T-giving, & this year I am achieving it. Bah humbug!

This is not meant to be a formal definition of Bah humbug like most terms we define on Dictionary.com, but is rather an informal word summary that hopefully touches upon the key aspects of the meaning and usage of Bah humbug that will help our users expand their word mastery.