QAnon is the name of a far-right conspiracy theory that believes there is a deep state plot, slowly being exposed online by an anonymous leader named Q, against President Donald Trump.

Like it or not, the 2020 Word of the Year has had a real and indelible impact on all of us. Read all about it here.

The origin and spread of Qanon 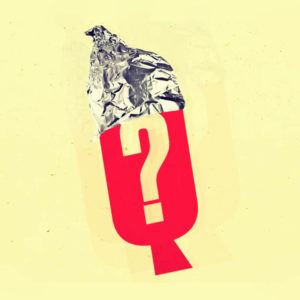 QAnon is thought to have started sometime in 2017. That’s when “clues” began appearing online allegedly released by a high-ranking federal government official—who goes by Q” The posts first appeared on 4Chan, and they have since spread to other parts of the internet, with fans of Q signing on as supporters of QAnon conspiracy theories and spending hours analyzing Q’s “clues” for information.

QAnon has gained several celebrity fans, including former baseball player Curt Schilling and actress Roseanne Barr, and it is considered by many to spread conspiracy theories and other forms of disinformation. In one QAnon video supported by Schilling, it was said that presidents prior to President Donald Trump were criminals, and the military stepped in to convince Trump to run for election.

The group’s existence was first thrust into the mainstream in late July 2018, when people appeared at a Tampa, Florida rally for Trump holding signs with Q-related messages, from “We are Q” to a simple hashtag “#Qanon.” The group is also known to look for deeper meaning in the use of the number 17 (which matches the position of Q in the alphabet).

Also we open up a discussion about “Q” and why the anger and vitriol by liberals at the mere mention if it really is the fake conspiracy they claim?
@gehrig38, June 2018
"I was probably in Washington, in my entire life, 17 times. True. 17 times. I don't think I stayed over night. You know what I'm getting at, right? #QAnon
@2020Maple, August 2018
Here’s another word to add to your mute list... #Qanon
@ArticulateGem, August 2018
Twitter says it is cracking down on accounts and content related to QAnon, the far-right U.S. conspiracy theory popular among supporters of President Donald Trump.
Zen Soo, The Associated Press, July 22, 2020
A Republican Senate candidate recently declared herself “one of the thousands of digital soldiers” in service of QAnon, a convoluted pro-Trump conspiracy theory about a “deep state” of child-molesting Satanist traitors plotting against the president.
Matthew Rosenberg and Jennifer Steinhauer, New York Times, , July 14, 2020
SEE MORE EXAMPLES

Since 2017, QAnon largely avoided mainstream controversies with few notable exceptions. In 2019, the lawyer of Anthony Comello claimed that Comello was motivated by his obsession with QAnon when he allegedly murdered Francesco Cali, a reputed mob boss.

In February 2020, a man, who was arrested in 2018 for barricading the Hoover Dam with an armored vehicle, quoted a phrase associated QAnon—Where We Go One, We Go All, often abbreviated as WW1WGA—in a letter explaining his motivations.

QAnon fully broke into the mainstream, however, in 2020 amid the COVID-19 pandemic. QAnon was connected with rampant disinformation and conspiracy theories around the coronavirus, and QAnon-related websites and social media accounts saw an explosion in traffic. Awareness of QAnon would further spread thanks to retweets of QAnon supporters by Donald Trump and his son, Eric, who posted a QAnon meme on Instagram while promoting one of his father’s rallies.

Several QAnon supporters made bids for political office during the 2020 election season. While most of these campaigns were hopeless or short-lived, QAnon supporter Lauren Boebert won an upset victory over a veteran Republican representative in a Colorado primary, and Marjorie Taylor Greene, a passionate QAnon supporter, was at one point considered competitive in a Georgia congressional race before withdrawing.

QAnon has continued to gain support—and spread disinformation—despite social media outlets such as Facebook and Twitter banning thousands of QAnon-related accounts and groups.

This is not meant to be a formal definition of QAnon like most terms we define on Dictionary.com, but is rather an informal word summary that hopefully touches upon the key aspects of the meaning and usage of QAnon that will help our users expand their word mastery.