What does muff cabbage mean?

Muff cabbage is a vulgar, vagina-based insult popularized by a 2010 South Park episode.

Where does muff cabbage come from?

Muff has been slang for “vagina” since the 1690s, likening the female genitalia to the hand warmer.

Muff cabbage appears on an October 2010 episode of the TV show, South Park, called “It’s a Jersey Thing.” A sendup of New Jersey culture, the episode features the character Kyle asking his parents what muff cabbage means after he hears a new neighbor, from New Jersey, using it at a cop.

Look-ups for the term spiked online right after the episode, and definitions of the term flooded Urban Dictionary in the immediate days after. These included: debris caught in the vaginal area, vaginal discharge, and pronounced labia, à la the equally culinary and offensive beef curtains.

Definitions for muff garbage also went up on Urban Dictionary after the episode, with some definers saying its variant muff cabbage renders a Jersey pronunciation that sounds like “garbage.” Some viewers have said muff garbage/cabbage is, indeed, a Jersey thing, and that the South Park writers may have picked it up from The Real Housewives of New Jersey or Jersey Shore, both of which the episode parodies.

The evidence suggests, though, that South Park made up muff cabbage as a crass, one-off, but memorable insult. Thanks to the popularity of the show, though, many folks added the word to their profane vocab. A punk band, Another Astronaut, apparently liked the term enough to name an album Muff Cabbage! in 2013.

It’s one thing for Cartman and his buddies tobe crude and vulgar; it’s another thing when the crudity and vulgarity (“muff cabbage!”) emanates from reality-show cretins.
Ken Tucker, Entertainment Weekly, October, 2010
yes easily seen with the human eye – but many other mammals do not see in color – maybe you should actually read the article rather than just spew your uneducated creationism muff cabbage
just sayin (username), Voice of America (comment), April, 2014 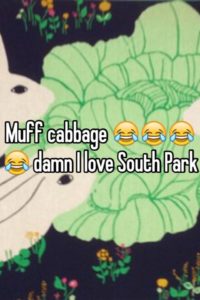 Most instances of muff cabbage use the term as a reference to South Park.

Some South Park fans have incorporated muff cabbage into their sweary lexicon, using muff cabbage not so much to describe an unkempt or unseemly vagina but as a general insult for something contemptible.

Yoooo I fixed the chain with needle nose pliers. It was a real #grind. This night went from muff cabbage to enjoyable real quick.

This is not meant to be a formal definition of muff cabbage like most terms we define on Dictionary.com, but is rather an informal word summary that hopefully touches upon the key aspects of the meaning and usage of muff cabbage that will help our users expand their word mastery.