What does mud shark mean?

Warning: This article features information about a racial slur that is highly offensive and that should not be used … ever.

Also, if you’re looking for Zappa songs or information about infamous groupie experiences, you’re in the wrong decade.

Mud shark is a racial slur for a white woman who sleeps with black men.

Where does mud shark come from? 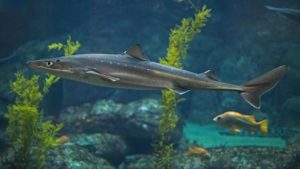 Mud shark is a nickname for the spiny dogfish or burbot that originated with Alaskan fishermen in the 1930s. It’s a critter eaten around the world, sometimes in fish and chips.

The mud shark is part of rock ‘n’ roll history, too. Frank Zappa’s 1971 song “The Mud Shark” is an account of a groupie who allegedly did some freaky sex stuff with a mud shark in a Led Zepplin roadie’s Seattle hotel room.

Unfortunately by 1998, things had turned ugly for our finned friend the mud shark, as white supremacist groups started using the term to describe white women who sleep with black men.

Mud shark disparages such women as “bottom feeders,” like actual mud sharks. If you’d like a side of sexism with that, mud sharks are generally described as unattractive, overweight, and suffering from low self-esteem and daddy issues. The word mud additionally smears skin color and shark, a person on the prowl.

When people ask me which one of my parents is white no ones surprised when I say my mom... Hahah #mudshark
@_MELYO, February, 2011
I had never heard the term “mud shark,” but I guessed its ugly meaning (a white woman who only dates black men), and I was nearly speechless with horror.  I grew up in an ultra-liberal family, and I had never encountered such blatant racism before.
Erika Schickel, Salon, May, 2014

Fishing enthusiasts and marine biologists may use mud shark to refer to the spiny dogfish or burbot.

Mudshark is also the title of a 2010 young adult novel by Gary Paulsen; it follows its unfortunately named protagonist through his adventures running a detective agency. Several businesses use Mudshark as a name, including a solar-powered brewery and a ceramics manufacturer, but we hope they’re just Zappa fans.

In 2012, Brad Curry, chief of Healthcare Administration Services at the Phoenix VA, was suspended for harassment of another employee that included calling her a mudshark. He was officially fired, due in part to other controversies as well, in 2016—yet even more evidence that no one should ever use this heinous racial slur if they want to keep their jobs and, more important, be a decent human being.

This is not meant to be a formal definition of mud shark like most terms we define on Dictionary.com, but is rather an informal word summary that hopefully touches upon the key aspects of the meaning and usage of mud shark that will help our users expand their word mastery.