Feedback
spoopy
Spotify and side hug

What does sportsball mean?

Where does sportsball come from? 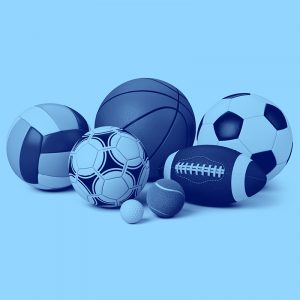 One early instance of sportsball comes in a 1992 Usenet, peeves-themed forum in a comment about people who spit on sidewalks. The user, Steve Masticola, conjectured that hocking a loogie on the street must make the perpetrator “feel like a Real Grown-Up Sportsball Hero,” perhaps a reference to baseballs players chewing spitting tobacco in the dugout.

The term sportsball, of course, combines sports and ball, like basketball or football. It’s intended to be generic, as if the extent of what the person knows about a particular sport is that it is a sport.

"Giants, that's baseball right?" "Dunno, one of those sportsball games."

Sportsball spread online in the 1990s and early 2000s, making Urban Dictionary by 2007. In 2009, filmmaker Peter Atencio took the concept literally in a humorous video called Sportsball! It showed office workers discussing some imaginary game of sportsball, an American and association football hybrid where everyone wins.

Sportsball was an established joke by 2014. That year, Nintendo’s Wii U gaming system released Sportsball, involving a whimsical combination of soccer, jousting, and flying birds. Also that year, BuzzFeed ran “This Is Why Sportsball Is Your New Favorite Sport,” featuring humorous sports GIFs and nonsense terms like “goaldown” and “scoreytouch.”

The term sportsball spikes in Google search interest each in January and February, around the time of the NFL Super Bowl, as well as in summer every four years when the FIFA World Cup is being held.

Sportsball is back. I’m single again.
@smplytffny, August 2018
So, calling any athletic game “sportsball” is a declaration of pride over being ignorant about sports. But, it also says sports does not conform to my interests or priorities, thus it is stupid and a waste of time.
Rick Novy, Entropy Central, September 2014 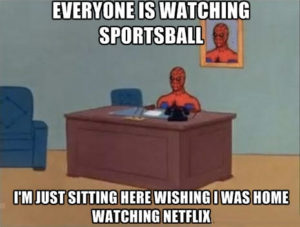 Sportsball is mostly used in a lightly mocking or judgmental way by people who proudly don’t like or know anything about sports. It can also knock people seen as way too fanatical about sports or to characterize sports as a waste of time.

It's that day of the week where all my friends start talking about #sportsball, and i pretend to understand their words, while waiting for a puck to drop.

However, the term has also been embraced by sports lovers as a fun and cute way to refer to games, teams, or matches.

It's a good day for Penn State sportsball

This is not meant to be a formal definition of sportsball like most terms we define on Dictionary.com, but is rather an informal word summary that hopefully touches upon the key aspects of the meaning and usage of sportsball that will help our users expand their word mastery.