What does streaks mean?

Streaks refer to Snapchat streaks or Snapstreaks, which happens when two friends message each other on the social app Snapchat within 24 hours for three or more consecutive days. 🔥🔥🔥

slide into the DMs, 💯 100 emoji, 🔥 Fire emoji, best friend, hugs and kisses, how you doing, PMOYS

Where does streaks come from? 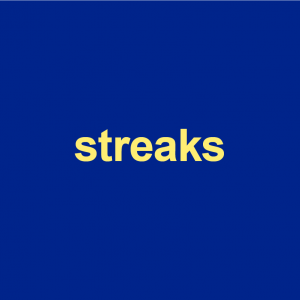 After its release in 2011, Snapchat quickly grew in popularity. As the number of users climbed, Snapchat offered more and more features. One of these features was streaks, officially called Snapstreaks, in 2015.

After two people message each other every day for three straight days, the Fire emoji 🔥 displays next to their names alongside a number indicating how long they’ve been on fire, i.e., on a messaging streak (uninterrupted run). This is a Snapstreak. 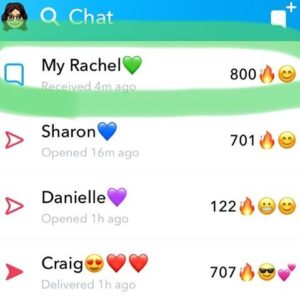 If a streak is about to end, the Hourglass emoji ⌛ displays near a friend’s name. The Fire emoji 🔥 returns when a message is sent. If you and a friend have a streak that hits 100 days, the Hundred Points emoji 💯 displays.

Upon its release, streaks were a hot topic, if you will, with popular websites discussing everything from how they work to how to maintain them to how your friendship isn’t over with someone just because a streak ends.

Do you remember in school when you’d give your mates your snap password whilst you was on holiday to keep your streaks
@emmalouise6756, August 5, 2020
For some users, their streaks are a huge accomplishment and signify the seriousness of their friendships through the app. Some people even have streaks that are hundreds of days long ... Keeping a streak, however, is a bit more complicated than simply sending a Snapchat to a friend once a day. There are some rules around the streaks that users hoping to hold onto theirs should be aware of.
Nina Godlewski, Newsweek, September 5, 2018
Snapchat should have a single button to continuously view all the snaps I have unopened cuz I've too many streaks and it's tiring to open them all
@jedi_tej, August 1, 2020
SEE MORE EXAMPLES

Whether you call them streaks, Snapstreaks, or Snapchat streaks, streaks simply indicate how continuously and regularly two people have messaged each other on Snapchat.

For some users, streaks are a barometer of the health of a friendship, with the end of a streak taken very personally. For others, it’s a game, with two friends simply seeing how long they can maintain the streak, even if it means just typing streak to one another once a day.

Some see an insistent upkeep of streaks as unhealthy, addictive, and obsessive. Cynics would add there a way to keep users on the app every day.

This is not meant to be a formal definition of streaks like most terms we define on Dictionary.com, but is rather an informal word summary that hopefully touches upon the key aspects of the meaning and usage of streaks that will help our users expand their word mastery.