What does uwu mean?

Squee! Uwu is an emoticon depicting a cute face. It is used to express various warm, happy, or affectionate feelings. A closely related emoticon is owo, which can more specifically show surprise and excitement.

There are many variations of uwu and owo, including and OwO, UwU, and OwU, among others.

Where does uwu come from? 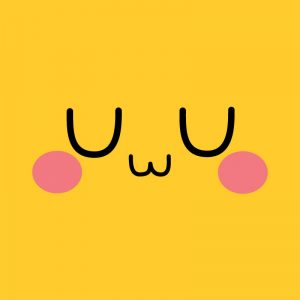 Before emoji took over, we had the humble emoticon. Emoticons use keyboard characters to represent facial expressions and emotions, like the classic smiley, :-).

In the case of uwu, the u is supposed to represent eyes and w, the mouth. The overall effect is meant to look cute, depicting a face of someone feeling all warm and fuzzy—as if the eyes are closed and the nose and mouth are scrunched up in a playful, smiling “Aww!” As for owo, the o‘s depict eyes wide open with surprise.

I got a bit better with small tracing and referencing
And I think she looks cute either way UwO pic.twitter.com/WguP3eSZwA

Uwu is connected to kaomoji, a type of Japanese emoticon which incorporates special characters used in Japanese writing. Kaomoji are considered kawaii, or “cute,” and often draw on anime and manga. Uwu is likely a simplified form of such kaomoji as (o･ω･o).

An early instance of uwu (as Uwu) can be found online at least by 2005 on an English-language anime and manga fan fiction site. It was likely being used in East Asian digital communication well before it.

Uwu and owo spread online in the late 2000s with the rise of social media and the increasing popularity of East Asian popular culture in the West.

Uwu got a lot of mainstream attention in 2018 after Mark Hamill (you know, Luke Skywalker?!) tweeted uwu as a fan request.

Bae packed me a lunch and even left a cute lil note uwu / feeling #blessed 😇 🙏
@rosequartzgrave, February 2020
i’m two seconds into this movie and i’m soft i wanna go on a date, get all done up for dinner and then go drive around hold hands and uwu soft kisses
@demisbabygirl, February 2020

Uwu, owo, and their many other forms are used by many people online, especially in fan art and fan culture. Uwu is often placed at the end of a sentence, meant to convey that the message was sent with various feelings of cuteness, happiness, or affection—that the poster is feeling all cutesy or lovey-dovey.

Okay but I also wanna do this :( can yall comment your name and I'll write them down UwU pic.twitter.com/nskIoG2lw8

It's been a wild ride on twitter so far, met a lot of amazing people here! Y'all make me really happy every day and I'm infinitely thankful for that!! uwu

Some people have taken to pronouncing it as uwu as [ oo-woo ], seeing it less as an emoticon and more as a word all its own, using it as a noun, verb, and modifier to describe various states of cuteness.

Gemini: just because I flirt with you, it doesn’t mean I uWu you.

me on the outside but then my friends make me feel all uwu inside pic.twitter.com/afdJlMlM1u

Uwu is also used as a hashtag, #uwu. Some people, as is ever true of the internet, ridicule uwu as overused.

This is not meant to be a formal definition of uwu like most terms we define on Dictionary.com, but is rather an informal word summary that hopefully touches upon the key aspects of the meaning and usage of uwu that will help our users expand their word mastery.