What does baka mean?

Anta baka? What are you, stupid?

Baka is a Japanese word that means “crazy,” “foolish,” or downright “stupid.” It can also be used as a noun for “a fool” or “a crazy or stupid person.” Anime and manga fans in the West have adopted the use of baka as a (usually joking) insult.

Where does baka come from? 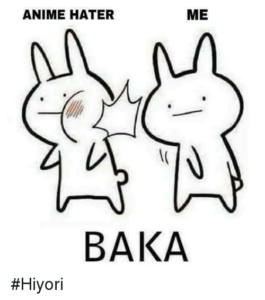 There are multiple theories on the origin of the word baka. One argues that it came from a Sanskrit word used by Buddhist monks in Japan. You know how slang spreads around a monastery. The Sanskrit word may have been moha, “bewildered,” or mahallaka, “senile.”

It may also come from wakomono, meaning “young people” (who are occasionally crazy or foolish) or an older use of baka meaning “a bankrupt family” (maybe as an insult for someone so irresponsible they’re in danger of bankrupting their family).

Baka (馬鹿) is written with the characters for horse and deer. Yet another origin story suggests that it comes from the story of a courtier who calls a deer a horse. What a moron.

Regardless of its exact origins, baka was in use as an insult in the 14th century, when it shows up in the historical epic the Taiheiki.

As with many other Japanese words, anime and manga are what really introduced the West to baka. One 1980s manga-turned-anime series, Urusei Yatsura, featured a character who constantly berates her would-be boyfriend, yelling “Darling no baka,” roughly “Darling, you idiot,” before electrocuting him with her space alien powers. 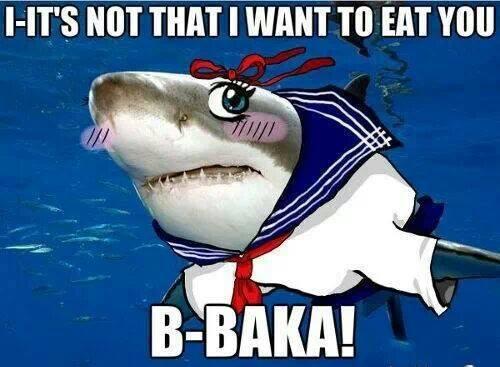 In 1995, the anime Neon Genesis Evangelion, the character Asuka practically uses Anta baka? as a catchphrase, roughly translated as “What are you, stupid?”

You freakin Baka pls be careful next time ❤️
@incognico__, September, 2018
Some of Murakami’s latest work explores his own role in the art world and his relationship to other contemporary artists. His recent series of Baka (Idiot) Paintings have his own stylized face at the center.
Christopher Atamian, Weekly Standard, June, 2018

Baka is an insult, but how insulting it is depends on context.

It may be used casually between friends, but at work it might be inappropriate. Also depending on where you are in Japan, it may be considered more or less offensive. If you don’t want to be baka, you might want to be careful about saying baka in Japan.

Baka is also used to describe people who are obsessive about one topic in particular. For example, there is a manga series called Inubaka: Crazy for Dogs. Similarly, in English, we might call someone a dancing-fool or boy-crazy. In that case, people may even call themselves baka.

This is not meant to be a formal definition of baka like most terms we define on Dictionary.com, but is rather an informal word summary that hopefully touches upon the key aspects of the meaning and usage of baka that will help our users expand their word mastery.