Ever wonder how your favorite insta influencers look flawless in every photo? Well, it may be thanks, at least in part, to the person behind the camera: their Instagram husband.

An Instagram husband refers to a person who helps a partner manage their Instagram social media channel, especially by taking photos. You may have seen them patiently waiting to drink their oat-milk latte until their partner snaps that perfect pic first. 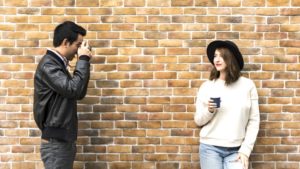 Jeff Houghton, the comedian who created and starred in the video, says in it: “Behind every cute girl on Instagram is a guy like me,” the Instagram husband. He goes on to document the trials and tribulations that Instagram husbands endure to support their wives or girlfriend’s social media, such as being the first to like and comment on a post, deleting their apps to store all the photos they take, and climbing to outrageous heights to get that perfect angle.

In the 2010s, dozens of articles, and countless more social media posts, were written by Instagram husband sympathizers and enthusiasts. Some take the title very seriously, given the rise of the social media influencer. Influencing is full-time job for some, requiring wardrobes, props, travel, photoshoots, and film/video editing—and often demands a manager, such as an Instagram husband. 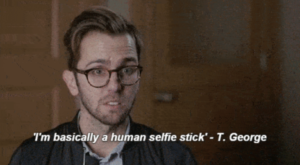 One proud instagram husband, Jordan Ramirez, quit his job to support his influencer wife. He even launched The Instagram Husband Podcast in late 2018 about the highs and lows of being an Instagram husband.

Celebrities and public figures such as John Legend, Jay Z, and President Barack Obama have all been dubbed Instagram husbands thanks to their famous, glamorous, and accomplished wives (and their popular Instagram accounts).

Getting a new phone to be a better Instagram husband to @Lizzym03
@Marym19, January 2019
It’s this guy’s birthday today!! 🎉 Adam, you are the most hard-working, genuine, and kind person I know. You make every day more fun (and I don’t even have to mention that you’re the best insta-husband there is, cause you already know)! 😉 I love you to the moon and back, boo! ❤️ Happy birthday! 🎂 #happybirthdaytoyou  #marriedlife #instagramhusband  #hubby  #marriage #husband #husbandandwife  #beachday #vacationtime
@savillamountain, Instagram, January 2019 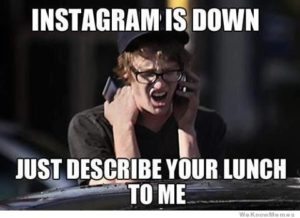 WeKnowMemes
They say that behind every great man is a great woman, but in 2017 this is probably more fitting: “behind every casual Instagram snap is a frustrated husband/boyfriend/best friend working hard to capture the right angle.” / This is the life of the so-called “Instagram husband” – the largely unrecognized faces behind popular Instagram accounts. And Kane Vato is one of Australia’s most famous.
Bianca Hartge-Hazelman, New York Post, June 2017
SEE MORE EXAMPLES

You don’t have to be male or even in a relationship with the Instagram user to be an Instagram husband, though the term is generally applied in those circumstances. You just have to be “married” to the person’s Instagram account. The phrase can extend to other social media platforms and blogs.

The term is especially used, naturally, by young women online. They may use it to express their desire, earnestly or jokingly, to have an Instagram husband for those sweet, sweet pics and clicks.

How do I teach my boyfriend to be an Instagram husband?

I asked my husband to be a better instagram husband and like my pics, so his dead ass went through and commented “like” on my pics 🙄😐

Other times, Instagram husband will be used, often with a sense of self-deprecation or irony, by people who have taken on the role.

Rules in teaching mom to be an Instagram husband.

When your girlfriend is 🔥but you still hate your life as an Instagram husband pic.twitter.com/SByGyXw1ni

My husband takkan jadi instagram husband…he got tired of me hiding my face & telling him to stop whenever he's trying to take my picture.

While often humorous and even mocking in tone, Instagram husband can also brim with love and affection.  Some folks will take the time to thank their sidekick and social media sherpa for all that they do, especially the pictures they take.

Hi there!👋🏻
.
With so many new faces around here I thought I'd do a quick #FridayIntroductions.
.
I'm Justine and I'm in love with my dentist (who also happens to be my Instagram Husband).💕
We have five little rugrats age eight and under that I homeschool.🖐🏻
I basically grew… pic.twitter.com/U47jGX7RAp

My boyfriend is not the Instagram husband that I want him to be. Almost all if the time, he stands with the sun behind him so that I’m squinting constantly. Or he gets bored two or three photos in and wonders off. He definitely isn’t down with contorting his body into a position that gives me the best possible angle. But he tries and I’m pretty grateful for that. Let’s be honest, at the moment I’m not very instagrammable anyway (can people be instagrammable, or just pretty graffiti walls?). Wild hair, big dark bags under my eyes, all the wobbly bits (including back fat, blergh)…But despite this, I am happier than I’ve ever been. I’m grateful that my other half, who is definitely my biggest fan, does it because he knows it makes me happy…even if he doesn’t particularly see the point of, or understand Instagram. He is a good egg. Here’s me. Tired. Hot. Missing my baby. But happy.

This is not meant to be a formal definition of Instagram husband like most terms we define on Dictionary.com, but is rather an informal word summary that hopefully touches upon the key aspects of the meaning and usage of Instagram husband that will help our users expand their word mastery.