What does Faith Hilling mean?

Faith Hilling is a fictional, satirical meme featured in a 2012 episode of the adult cartoon South Park. It involves boys pulling their shirts to resemble having breasts.

Where does Faith Hilling come from? 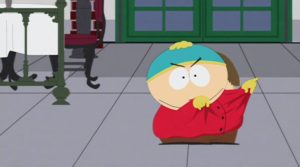 First airing in March 2012, “Faith Hilling” is the third episode of Season 16 of South Park. According to show creators Trey Parker and Matt Stone, they originally wanted to make an episode about planking (lying down like a board plank in an unusual places), but the viral activity had already waned.

They decided to instead make an episode about Tebowing, another viral activity popular in early 2012 involving imitating football player Tim Tebow’s prayer pose. This, too, became old news very quickly. Finally, Parker and Stone settled on making an episode about memes and viral content in general.

In the episode, the titular Faith Hilling was created by the show’s central immature fourth-graders and is done by grabbing one’s shirt so as to resemble breasts. The name of the fake meme comes from country singer Faith Hill, verbed (Hilling) just like Tebowing. Stone and Parker have said they chose Faith Hill simply because she sang the theme song to Sunday Night Football. The breast resemblance is pure, South Park childish absurdity.

The point of the episode was to satirize meme/viral culture by telling a story about something even as fatuous as Faith Hilling could become a fad. But thanks to the influence and popularity of South Park, Faith Hilling became a short-lived trend in real life after the episode aired—proving the episode’s point.

Ruining all my shirts by faith hilling
@androostoowort, April 2012
This week, South Park offered up some sober advice for its audience: memes are dangerous, and it’s impossible to keep up with all of them. There’s also the recurring idea that if you show off a meme in public, you will be hit by a train...Wednesday’s show finds the characters taking pictures of themselves at the debate pulling out their shirts in a meme they call “Faith Hilling.”
Erik Hayden, Time, March 2012 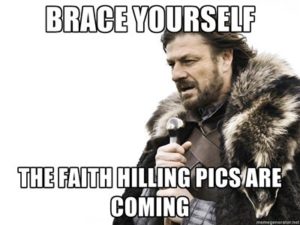 Both men and women—but let’s be honest, far more men—photographed themselves Faith Hilling in homage to the show.

COME ON EVERYBODY ITS FAITH HILLING TIME pic.twitter.com/JfpTiHKNki

But like all memes, Faith Hilling quickly grew stale as 2012 went on. However, it has occasionally reappeared since then thanks to reruns and South Park fans.

Hey @SouthPark, what do I get for being the 1st guy to be Tebowing, Faith Hilling and Taylor Swifting while in a Zero-g flight? 😄 pic.twitter.com/YYfD7ehXO5

This is not meant to be a formal definition of Faith Hilling like most terms we define on Dictionary.com, but is rather an informal word summary that hopefully touches upon the key aspects of the meaning and usage of Faith Hilling that will help our users expand their word mastery.