What does love tap mean?

A love tap is a light touch used to show affection. Metaphorically, it is a nudge used to give someone a reminder or motivation. A mild scrape against a car is also described as a love tap.

Where does love tap come from? 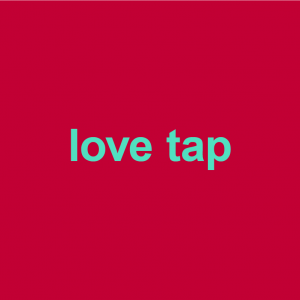 The first known use of love tap as a “gentle blow” to signal caring goes as far back as 1809. Also in the 1800s, author James Fenimore Cooper ironically penned a character who received a love tap across the shoulders “by so gentle an instrument as the butt of a musket!”

By the 21st century, love tap was being used as a metaphor for actions seen as forceful but meant to be an affectionate nudge, e.g. My boss gave me a love tap to finish the report. L.A. rockers Smallpools sang of figurative love taps in their 2015 song “Lovetap!”: “Shake down, it’s all she wrote / It was a love tap for all we know.”

The term love taps has also become a facetious way to excuse roughhousing. Love taps may also refer to mild fender-benders, and those instances when a driver slightly bumps a car in front and behind, often leaving small dings or scratches, while parking in a tight spot.

"Were we being loud?" Oh nah, I was just giving the wall a love tap, no of course you were being loud.
@sheabutterfemme, February 15, 2014
Sometimes I wish it was acceptable to just bump into other cars when they’re going slow. Like a little love tap, you know?
@Triisss, July 25, 2020
I'm in line at the front desk, and I get hit in the ribs. My right ribs. And it hurt. ... I was so pissed. I look around, and it's Muhammad Ali. And he says, 'Hey, kid.' And I'm like, why did you have to give me a love tap so hard? He was old, but it still hurt.
Tiger Woods quoted by Daniel Rapaport, Golfworld, April 26, 2020
SEE MORE EXAMPLES

Fellow athletes smacking butts in the locker room? A girlfriend giving her boo a fake punch? Literal love taps. A father nudging his son to visit his grandmother? A figurative love tap.

A friend hitting his pal a little too hard while play-fighting? This may be ironically called a love tap. This sense of irony also often extends to vehicular love taps.

Love tap can be a noun (she gave me a love tap) or a verb (she love-tapped him).

This is not meant to be a formal definition of love tap like most terms we define on Dictionary.com, but is rather an informal word summary that hopefully touches upon the key aspects of the meaning and usage of love tap that will help our users expand their word mastery.