What does simp mean?

Simp is a slang insult for men who are seen as too attentive and submissive to women, especially out of a failed hope of winning some entitled sexual attention or activity from them.

Translation? The word simp is meant to troll young men for doing anything for a girl to get some action he supposedly deserves.

While much older as a term, simp massively trended among late 2019 and early 2020 due in part to a TikTok trend among male members of Generation Z called “Simp Nation.” The slang has been criticized for stereotyping such men as effeminate and implies women are manipulative sexual objects. However, the term is also evolving some more general senses of liking someone, akin to the slang stan.

Example: If telling his girlfriend he would always be there for her makes him a simp, then I guess he’s been simping for a long time now.

Where does simp come from? 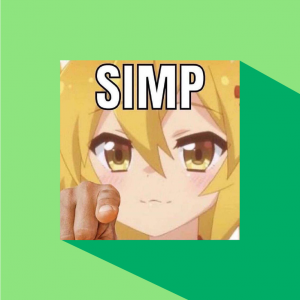 The slang simp appeared to come out of nowhere in 2019–20. It’s popularly claimed that the internet slang simp is an acronym for “Suckers Idolizing Mediocre Pussy.” But, as usual, the story of simp isn’t so simple. The internet teen slang simp, as is true of many slang terms that go mainstream, appears to come directly from Black hip-hop slang—and it’s older than you may think.

Hip-hop lyrics from the late 1980s and 1990s were already using simp as an insult for a men perceived as too subservient to a woman. For instance, on Ice-T’s 1987 “Our Most Requested Record [Long Version],” DJ Evil E raps: “Taking out all simps and suckers …” Urban Dictionary entries in the early 2000–2010s also use simp in this way, with some of them maintaining that simp is a blend of sissy and pimp.

Then there’s simp as a short form of simpleton (a fool), which was first recorded all the way back in the early 1900s. The relationship between the historic and contemporary slang simp is unclear, but we can’t rule out connections—or at least associations—between the two terms.

The slang simp spreads in the 2010s. In 2013, YouTube user DJ Akademics referred to a simp as an “overly emotional” man in a video titled “Drake is officially King Of Simps.” In 2019, simp further spread on social media, notably found as an insult for weak-willed men on Men Going Their Own Way subreddits.

Simp gained much more mainstream attention starting in December 2019. That’s  when TikTok user @pollo.boyy created a viral TikTok trend called “Simp Nation.” In this trend, people, usually young men, post short videos describing allegedly stereotypical behaviors of a simp, like comforting his girlfriend or buying her dinner and not getting repaid with sexual attention as a result.

Another moment that brought simp mainstream attention came in March 2020, when many young men said they were, or were accused of, acting like a simp (simping) in response to a massively viral video from TikTok user @neekolul in a Bernie Sanders campaign t-shirt dancing to “Oki Doki Boomer,” a novelty song referencing the OK boomer meme.

What is No Simp September?

The slang simp helped prompt an alliterative internet challenge called No Simp September, a riff on other such occasions as No Nut November, itself modeled on the likes of No-Shave November. While meant as a joke, discussions and descriptions of the challenge include a lot of sexist language and reinforce many traditional gender stereotypes.

No Simp September challenges men to refrain from simping (that, acting like a so-called simp towards young women) during the entire month of September.

One instance of No Simp September can be found on Twitter as early 2015 (though its exact sense isn’t clear), joined by a handful of uses in 2019.

The first of September 2020, sure enough, saw No Simp September go viral on Twitter. Major brands even joined in on the joke.

Having feelings, crying, caring about someone, “simping” as you guys like to call it, etc. does not make you less of a man. It means you’re human, and most women appreciate it a lot. Stop calling yourselves weak or pussies for showing emotion.
@bbyb_, May 2020
This ideology is illustrated all over TikTok: If a user is treating their partner with respect, they might be labeled a "simp," or told they're acting "soft," typically by friends or by themselves, in a self-deprecating manner. Take TikTok user @ryantheleader, who posts videos poking fun at the term by handing money to a female friend, then letting her stand on him. The implication? He's a doormat, and she's walking all over him.
Carolyn Steber, Bustle, April 2020

Online, simp is primarily, and often with mean irony, used by young men to belittle other young men for behavior deemed subservient to women, often with the implication they are doing to win her (sexual) attention or affection.

One can be called a simp for something as simple as paying for dinner—or paying a girl a compliment. One subtext of simp is that such men are weak and effeminate, and that they can’t get a girlfriend on their own terms. Another subtext of a simp is even more directly sexist, implying women are controlling or just there to provide men sexual satisfaction.

Simp can be used as a noun (e.g., He’s such a simp) and a verb (e.g., All he does is simp over her, he’s actually simping right now by sending her so many messages!)

As simp has become more widely used, it appears to be evolving as a slang way of indicating someone has a crush on someone.

was about to compliment my girlfriend but then i realized some 42 year old man with an anime profile picture might call me a simp, thank god i avoided that one

my gf: am I a simp
me: you need to be in my mentions a little more for that
my gf: pic.twitter.com/M1nSCjWGI4

When you start simping people for their talent rather than their looks, ur a stan.

Insulting men for traditionally non-masculine qualities—being vulnerable, sensitive, kind, and thoughtful towards their partners—is nothing new. Nor is a slang term like simp new, and there have been many, many other slang terms, old (like being whipped) and recent, used in a similar way.

This is not meant to be a formal definition of simp like most terms we define on Dictionary.com, but is rather an informal word summary that hopefully touches upon the key aspects of the meaning and usage of simp that will help our users expand their word mastery.