Previous "Forbearance" vs. "Deferment": Understanding How Each Option Affects Your Loan Next Which Type Of Learning Gets You Ahead Of The Curve?

Lately, it seems everyone has been talking about the Delta variant of COVID-19. And just as we were getting used to this new term, a Lambda variant appeared in the news. Delta? Lambda? Do these words mean anything? Why are we using them to refer to COVID-19? Delta and lambda are actually letters of the Greek alphabet, and there is a good reason that we are using them to refer to different COVID-19 variants.

The organization that decided to use Greek letters to refer to COVID variants was the World Health Organization (WHO). The WHO chose the labels for several different reasons. For one, the Greek letters are shorter and easier to remember than the scientific names assigned to different virus variants. For example, the name “Delta variant” is much easier to say and remember than its scientific name, “B.1.617.2.” The WHO also stated that the Greek letters would help avoid stigmatizing by not naming variants after the place where they were first detected (e.g., Indian variant).

While there are many variants of COVID-19, the WHO saves the Greek letters for variants that are especially contagious, virulent, or resistant to vaccines. In general, the Greek letters are assigned chronologically to a COVID-19 variant in accordance with when the particular variant was discovered. However, major variants such as the Delta variant may be moved up earlier in the list if they are reclassified by the WHO (as the Delta variant was).

As of August 2021, the WHO lists eight notable variants of COVID-19 with the Lambda variant being the most recent. Lambda is the 11th letter of the Greek alphabet. Why are we missing three letters? Three COVID-19 variants were briefly classified as epsilon, zeta, and theta, but these variants were “downgraded” by the WHO after further research showed they didn’t meet the criteria to be labeled with a Greek letter.

If there are more than 24 variants and the WHO runs out of Greek letters, the organization plans to announce a similar series to be used alongside the Greek letter series.

The English alphabet had many more members than it does today. Learn about two extinct letters here.

A very brief history of the Greek alphabet

The Greek alphabet was the alphabet used by—you guessed it—the ancient Greeks. It can be traced back to at least 1000 BCE, and it is still in use today in modern Greece. The Greek alphabet was developed from the Semitic alphabet of the Phoenicians. Some of the names of the Greek letters are actually based on Hebrew words, and the letters’ original shapes are believed to represent what those words meant:

The following chart shows how the letters of the Greek alphabet line up with their English counterparts. Some of the Greek letters correspond to sounds rather than letters (click on the image to enlarge): 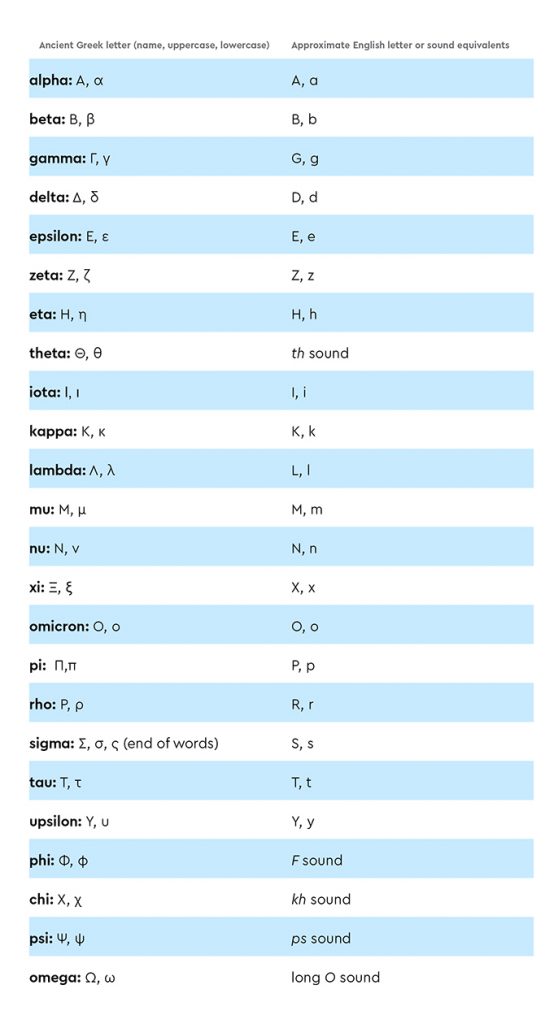 What about the other letters … ?

The letter J was actually the last letter added to the English alphabet and was created by an Italian grammarian in the 1500s. The letters U and V share a history with each other and the letter W shares a history with both of them. The modern shapes of these and other letters were influenced by the Greek and Etruscan letters, but they also evolved over time as they were used in medieval manuscripts.

Do you know which letter was eventually removed from the English alphabet and made into a symbol? Take a look.

Other uses of letters of the Greek alphabet

Although English lives for the moment, it still remembers to ask its grandparent for help every now and again. Let’s look at some instances where we use letters from the Greek alphabet.

Greek letters are commonly used in math and science to represent things like constants or variables. Some examples include:

The World Meteorological Organization used to rely on Greek letters if they ran out of names for hurricanes and tropical storms in a given year; however, they retired the practice in 2021. In its place, the WMO created a new supplemental list of backup names (also based on people’s first names) that they will use if necessary. The organization said that the Greek letters made tracking hurricanes too confusing. Storms that got a Greek letter name included Hurricane Zeta of 2020 and Tropical Storm Beta of 2020.

As part of what’s known as the Bayer designation system, astronomers use Greek letters when naming stars and star systems, as in Alpha Centauri, Beta Centauri, and Gamma Cassiopeiae.

Greek letters are used in technology to refer to tests and trial runs, such as in software. An alpha test is typically done by employees before being released to the public. A beta test usually involves letting a select number of users test something before it is widely released. An alpha or beta version of something is one that is still in alpha or beta testing. Alpha and beta versions of products are often said to be “in alpha” or “in beta.”

A few particular Greek letters have been used for significant reasons in Christianity. In English translations of the Book of Revelation, God declares Himself to be “Alpha and Omega, the beginning and end.” Today, the phrase alpha and omega is often used metaphorically to refer to the basics or essentials of something. The Greek letters chi and rho are used in symbols for Jesus Christ, as they are the first two letters used to spell Christ in Greek.

Fraternities, sororities, and other societies

The tradition of using Greek letters in college fraternities and sororities goes back to 1776, where the practice was started by what is now the Society of Phi Beta Kappa. The letters were chosen based on the club’s motto Philosophia Biou Kybernetes, which means “Love of Learning is the Guide to Life.”

Some of the more prominent sororities and fraternities include:

Slang and other expressions

Inspired by the use of alpha and beta in scientific descriptions of animal hierarchies, Greek letters are used in slang expressions to refer to different types of people. For example, alpha refers to a dominant or assertive person while beta refers to a passive or subservient person. The terms sigma and omega are also used in slang to refer to different kinds of people.

Have you wondered why the alphabet has uppercase and lowercase letters? And why they are called that? Read about it here.

Previous "Forbearance" vs. "Deferment": Understanding How Each Option Affects Your Loan Next Which Type Of Learning Gets You Ahead Of The Curve?
RELATED POSTS

Home / Trending Words / Delta, Lambda … What Comes Next? A Cheat Sheet On The Greek Alphabet