Feedback
Previous What Does "Camp" Mean In Fashion? Next Scrabble Rules Some Experts Don't Even Know 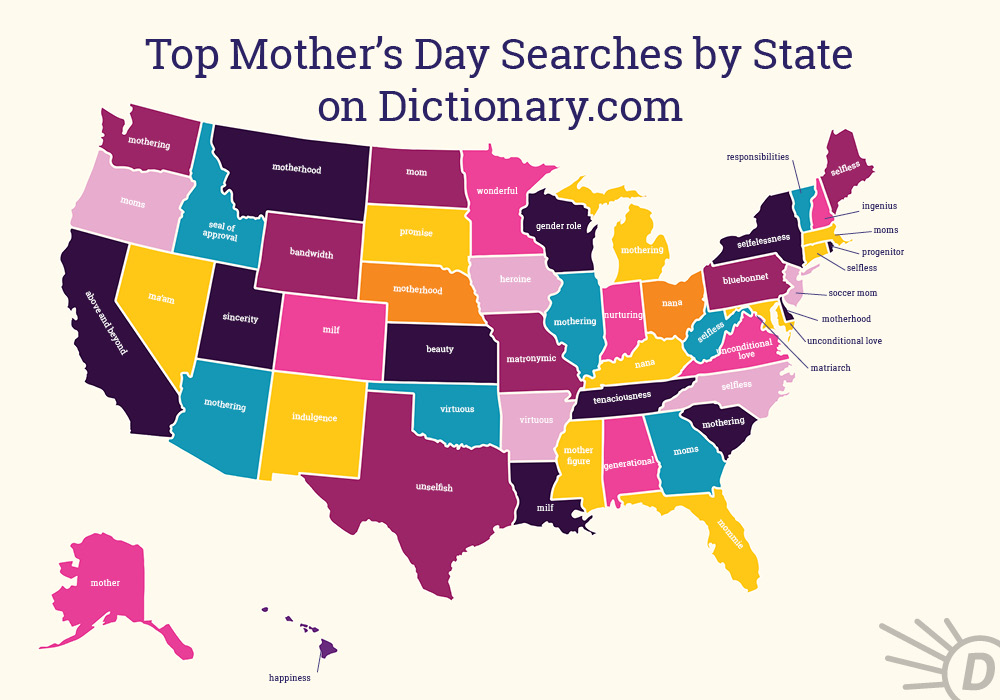 By now, we trust you’re not looking up when Mother’s Day is. Surely you’re just consulting the dictionary for the perfect words to grace your mother’s card, right?

Well, the numbers don’t lie—and especially not to mothers. Our Data Scientists analyzed what users looked up on Dictionary.com on Mother’s Day in 2018 and found these as the top trends by state.

They give and they give

Mothers give so much of themselves, and that’s reflected in the chief theme of our Mother’s Day lookups: selflessness.

In Connecticut, Maine, North Carolina, Oregon, and West Virginia, people were searching for selfless, “having little or no concern for oneself, especially with regard to fame, position, money, etc.” Related searches include selflessly (Tennessee), selflessness (New York), and unselfish (Texas).

Top searches in other states showcase other qualities we admire in our moms. Arkansas and Oklahoma were looking up virtuous, “morally excellent, upright,” while Maryland and Virginia were researching unconditional love, or “love given without conditions.”

When not searching beauty, Kansans were looking up luminous energy. We don’t have that exact phrase in the dictionary, but maybe we should! New Hampshirites, meanwhile, were apparently checking their spelling of ingenious when typing in “ingenius.”

Here are some other state searches highlighting motherly attributes:

Speaking of motherly, various mother-related words constituted the most searches in the followings states.

Mothering trended in Arizona, Illinois, Michigan, North Carolina, Ohio, South Carolina, and Washington. The word, which means “the nurturing of an infant or small child by its mother,” can describe loving care more generally.

Perhaps appropriately for the seat of the federal government, Washington, DC was interested in matriarch, “the female head of a family or tribal line” (along with the less stately hostest with the mostest).

Missouri was interested in matronymic, referring to a name derived from a mother or female ancestor.

In other states, we saw familiar, maternal names and terms of address across generations (whose adjective form, generational, coincidentally spiked in Alabama):

Surely, folks in these great places know what mom means, so why would they look them up? Perhaps they wanted to know how the dictionary defines them in order to think about the characteristics of a mother or the identity of one.

Indeed, searches for motherhood trended in Delaware, Montana, and Nebraska. Rhode Islanders were especially interested in progenitor, “a biologically related ancestor” or “a predecessor or precursor” more generally. Mississippians were especially interested in mother figure, “a woman embodying or seeming to embody the qualities of an idealized conception of the female parent, eliciting from others the emotional responses that a child typically has toward its mother.”

Were people in Vermont and Wisconsin thinking more critically about the place of mothers in culture? Responsibilities and gender role trended in those states, respectively.

Do you kiss your mother with that mouth?!

Then there’s Wyoming. Perhaps our friends in the Equality State needed to look up when Mother’s Day was, after all. Top searches there included bandwidth, “precuation” (misspelling for precaution), and begrudgingly.

Take it from these states. We could send the mothers in our lives some flowers, like the bluebonnets that trended in Pennsylvania, treat them to some indulgence (New Mexico), or if time is of the essence, make a promise (South Dakota) to do something special.

Above all, whether over the phone or over brunch, we can thank our mothers for the happiness they bring us, the courage they show, and how strong they are—all top trends in Hawaii.

Those are words to earn any mother’s seal of approval (Idaho).

Previous What Does "Camp" Mean In Fashion? Next Scrabble Rules Some Experts Don't Even Know
RELATED POSTS

Home / Pop Culture / Holidays / What Word Is Your State Looking Up On Mother’s Day?