What does Dry January mean?

Dry January, or Drynuary, is when people abstain from drinking alcohol during the month of January, especially after the excesses of the holidays.

Where does Dry January come from? 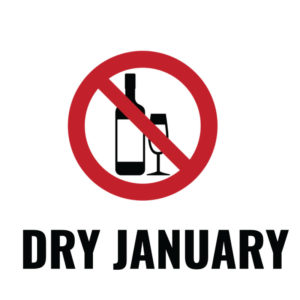 In 2011, writers John Ore and Jolie Kerr wrote a humorous article for the website The Awl about what they called Drynuary, where they would challenge each other to avoid drinking alcohol during the entire month of January. In a 2014 article on Deadspin, Kerr said that Ore came up with the idea for Drynuary as a result of a dare.

This word is a blend of January and dry, which here means “not drinking alcohol.” Reasons for participating in Drynuary vary, but it is generally motivated by a desire to take a break from alcohol in the after all the indulgences of the holidays. Drynuary can also be connected to New Year’s resolutions centered on weight loss and self-improvement.

Independently of Ore and Kerr, a similar idea was the focus of a campaign, called Dry January, organized by the group Alcohol Concern UK in the United Kingdom. Alcohol Change UK says the first official Dry January was held in 2013. Their campaign actively recruits people to give up alcohol for a month. By 2018, millions of people were participating every year.

By the end of the 2010s, both Dry January and Drynuary gained wider awareness thanks to media coverage. John Ore and Drynuary were featured in a 2016 New York Times article. In the UK, Dry January has been highlighted yearly by the BBC and The Independent.

Decembers only just begun and I already can’t wait to do dry January. 🤕
@broganfaye_, December 2019
By the time New Year's Eve rolls around I feel sick, groggy, and bloated, and desperately crave a carrot that hasn't been drowned in butter and sugar. Drynuary reverses all of that.
Jolie Kerr, Thrillist, January 2016

Dry January and Drynuary can be used interchangeably, though in the UK, Dry January is specifically associated with Alcohol Concern UK’s campaign.

Online, some people post about the challenges and benefits of Dry January and Drynuary.

No resolutions, if I wasn't willing to do it in before I wouldn't succeed in 2020. That said, here are things I've been working on that manifest in January 2020:#Drynuary
Eat primarily healthy whole foods
Exercise Daily (10 min +)
Implement #GTD
Design daily
Meditate daily

Planning a booze-free #NewYear? Check out these tips for a successful #drynuary: https://t.co/RF6WeiDlOu

The event has also inspired a number of jokes and even backlash, as some people are annoyed by the perceived smugness of people doing Drynuary.

Dry January? Nah mate, do Dry February 'cause it's a shorter month. 🍺 pic.twitter.com/iWaIM531Wz 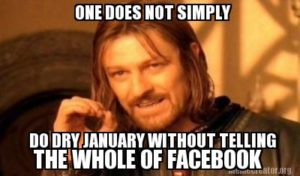 Sometimes people use Drynuary to refer to other things they are abstaining from in the new year, such as social media.

I'm starting my long-planned Twitter Drynuary/ mini-sabbatical a little early, returning sometime before the Oscars. Happy New Year to everyone.

This is not meant to be a formal definition of Dry January like most terms we define on Dictionary.com, but is rather an informal word summary that hopefully touches upon the key aspects of the meaning and usage of Dry January that will help our users expand their word mastery.