What does pretzel logic mean?

Where does pretzel logic come from? 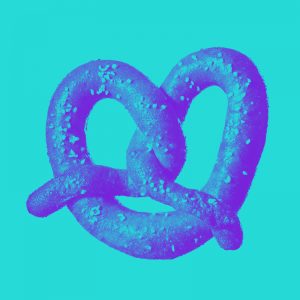 A classic pretzel is circular, full of holes, and twists in on itself—just like faulty reasoning. Hence the (delicious) expression, pretzel logic. The term is evidenced by at least 1967 in American Opinion, a magazine of the far-right, anticommunist John Birch Society.

Pretzel logic is used to describe inconsistent, illogical thinking that, once scrutinized, doesn’t stand up. It’s similar to the term illogic.

Indeed, the phrase pretzel logic frequently appears in political contexts, used in an effort to call out opponents’ logical fallacies or to characterize someone’s twisted line of reasoning or justifications.

Pretzel logic from the president's attorney.
The one not going to prison. https://t.co/D53JqTq5c6

The term spread in the 1980–90s, but it is closely associated with the acclaimed 1974 album and title track Pretzel Logic by rock band Steely Band. The song is, apparently, about reckoning with the passage of time.

With your pretzel logic no animal should ever be neutered or spayed. All those puppies and kittens deserve to live a full life too.
@jeanfin46831889, March 2019
Claiming a dessert didn’t exist until it had a published recipe to validate it is pretzel logic.
Keys Weekly, February 2019 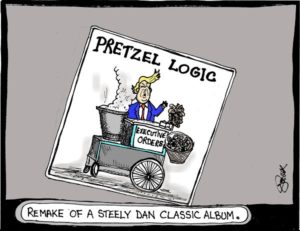 Arguments that are convoluted or seen as such are popularly characterized as pretzel logic, especially in political contexts.

Agreed . But we need to get rid of most politicians because they are greedy , egotistical , and have pretzel logic . There is no one that is honest, intelligent ,and unselfish. I don't know what the answer is. I would love to run for office but I had too much fun in college.😬

Puns abound around pretzel logic, especially in food contexts, and the phrase has been used for grabby headlines.

I am starting a movement to say the same lie over and over until it is believed as truth. Rudy said, and I quote”There is no truth”. And he appears to be an intelligent person. So “There is no truth” is my mantra until it becomes truth. LOL pretzel logic with an evil twist.

I think the first I actually went out to a record store to buy with my own money was Steely Dan's "Pretzel Logic". ?1974

This is not meant to be a formal definition of pretzel logic like most terms we define on Dictionary.com, but is rather an informal word summary that hopefully touches upon the key aspects of the meaning and usage of pretzel logic that will help our users expand their word mastery.