Sco pa tu mana is a nonsense phrase made popular by a rap by the Ghanaian musician Patapaa. The phrase inspired the Skopatumana Challenge, where people post videos of themselves rapping Patapaa’s lyrics.

Where does sco pa tu mana come from? 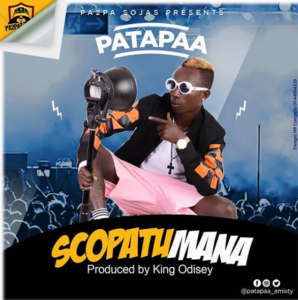 Sco pa tu mana—among other spellings, such as sco pa tu manaa—became popular starting in April 2019 thanks to Ghanaian musician Patapaa. Patapaa was featured in the song “Daavi Neba” by fellow Ghanaian artist Kawoula Biov, which was released on YouTube on April 3, 2019. On it, Patapaa raps what became transcribed as sco pa tu mana.

But what does sco pa tu mana mean? Nothing meaningful in Akan, a Ghanaian language Patapaa speaks and performs in. It’s complete gibberish, apparently, but curious fans have discovered that sco pa tu mana coincidentally resembles expressions in Hawaiian, Malay, and Indonesian.

Patapaa’s lyric became a hit among Ghanians (to the point it caused friction with the song’s actual artist, Kawoula Biov) because it’s fun to say but also gets people wondering what it’s supposed to mean. In late April, Patapaa seized on the song’s popularity and on Instagram, initiated an internet challenge, tasking people with attempting to sing along with his gibberish rap.

Becoming called the Skopatumana Challenge (among other spellings, including as the hashtag #Skopatumana), it spread in popular Ghanaian culture and was covered in Ghanaian media. It gained further attention online as people new to the song and challenge around the world puzzled over what sco pa tu mana is. The phrase earned a Know Your Meme entry in late June 2019 and Urban Dictionary entries in July.

I really be walking around saying, “ sco pa tu mana” without even knowing wth I’m saying
@sydkaii, July 2019
Lool sco pa tu mana has reached french twitter. Must be Ghana’s strongest export. Even travelled farther than cocoa
@Ohenewa_S, June 2019
The words in the rap of the song “Skopatumana” is just too difficult to comprehend. It has no meaning yet, music has a way of making his rhythmic words interesting to the ears of his fans.
NewsGhana24.com, April 2019
SEE MORE EXAMPLES

Sco pa tu mana is used in reference to Patapaa’s section of “Daavi Neba” among those familiar with the song, artist, internet challenge, Ghanaian popular culture. Patapaa himself favors Skopatumana on social media.

Outside of fans of Ghanaian rap, sco pa tu mana bewilders people not-in-the-know about what it means. Sometimes people (apparently familiar with sco pa tu mana) will use the phrase randomly.

can someone pls explain WTF DOES SCO PA TU MANA MEAN? ITS BEEN ON MY TL SINCE DAYS NOW AND I SWEAR I'M GONNA GO MAD IF I DONT FIND OUT WHAT IT MEANS pic.twitter.com/IiF4ckoXFg

Sco pa tu mana DONT MEAN NOTHING, it is is GIBBERISH pic.twitter.com/zH6ab1WYXC

This is not meant to be a formal definition of sco pa tu mana like most terms we define on Dictionary.com, but is rather an informal word summary that hopefully touches upon the key aspects of the meaning and usage of sco pa tu mana that will help our users expand their word mastery.