Feedback
dayt
deal with it

What does deadass mean?

Deadass is slang for “seriously.” That is, no kidding, for real, we’re deadass not lying to you.

Where does deadass come from? 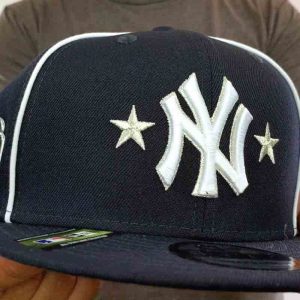 Deadass surfaces in New York City slang in the late 1990–2000s. It made its Urban Dictionary debut in 2003, defined as “completely and honestly serious.”

Earlier uses of dead-ass include slang for a “boring person” (1960s) or as a general intensifier for “wholly” (1950–60s), as in dead-ass serious, or “extremely serious.” Dead, here, means “completely” and -ass is an intensifying suffix (e.g., My broke-ass roommate). Deadass, then, may have been shortened from an expression like deadass serious or its sense of “seriously” may have grown out of “completely.”

In 2016, deadass spread on the subreddit r/BlackPeopleTwitter. One of the most popular posts, discussing deadass as slang, defined the term as a “question, reaction, and confirmation in NY.” The subreddit also began satirizing a specific type of black New Yorker with a series of image macros featuring the terms deadass, my guy, and Timbs (Timberland boots). The memes migrated from Reddit to social media more broadly, giving more attention to deadass. 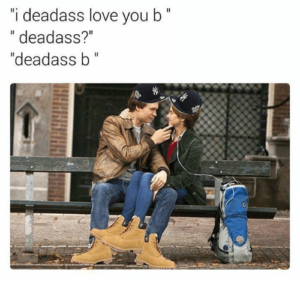 Getting out of bed in the morning is deadass torture
@mairanotmaria2, October 2018
In my continued research, I started noticing patterns in the types of pictures, bios, and people. A few common themes emerged, the first being that if someone happened to be over six foot, they made sure to let you know that they are, in fact, over six foot. My personal favorite boldly declared that he is, and I quote, "deadass 6’4." Congrats, dude.
Kiera Riley, The State Press, October 2018

Deadass serves as a slang way to emphasize or intensify a statement, functioning like the word seriously or the slang for real, I deadass met Beyoncé at that concert or Dude, deadass?! Which means deadass is typically an adverb. We’re deadass not pulling your leg.

I love my brothers deadass tho

Overuse of deadass, however, may get you made fun of by some in internet culture. As noted, a meme makes fun of certain New Yorkers, featuring Yankees hats, Timberland boots, and phrases like deadass straight facts my guy, all apparently associated with some self-styled hip-forward residents of the Big Apple. 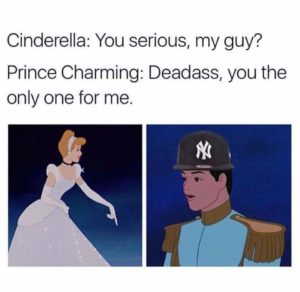 This is not meant to be a formal definition of deadass like most terms we define on Dictionary.com, but is rather an informal word summary that hopefully touches upon the key aspects of the meaning and usage of deadass that will help our users expand their word mastery.