Wagwan is a way to say What’s going on? in Jamaican English, used throughout the Jamaican diaspora (or where Jamaican people live outside of Jamaica), especially in South London.

Where does wagwan come from? 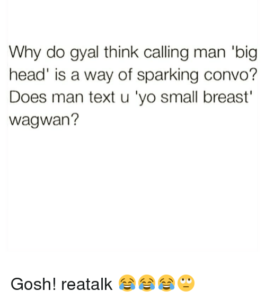 Jamaican English renders the greeting What’s going on? as Wat a gwaan? Wat a gwaan has sometimes been further reduced to wah gwan or wagwan in the Jamaican diaspora, especially in London.

Wat a gwaan twitter, #BLESSSED #MORNING TO #ONE AND #ALL WHEREVER ON THE GLOBE YOU ARE 🙏🏿 #SELAH

The term was popularized in London with the arrival of Jamaican immigrants in the 1980–90s, associated with Jamaican diaspora street culture there. In some instances, it’s been picked up by white people, leading some to call the usage appropriation. Others, like British-Jamaican rapper and MC Tyrone “Big Narstie” Lindo in 2016, think that the use just shows the influence of Jamaican culture on London more generally. Even a generous Big Narstie admitted, though, that it annoys him when lads from “the country” used wagwan, since they couldn’t exactly claim to be part of the “ghetto culture.”

Former President Barack Obama delighted the Jamaican people when he greeted them during a 2015 speech at the University of the West Indies by saying, “Greetings, massive. Wagwan Jamaica?” The clip of his opening was later sampled by DJs in dancehalls all over the island.

where the fuck has the chemistry gone in this team? it’s like no one knows wagwan
@MikesJnr, August, 2018
Sheldon Thomas, chief executive of Gangsline, said officers needed to become more "street: and understand slang like "Wagwan" - the Jamaican Patois for "What's going on?", if they are to effectively communicate with and police gang members and other urban youths.
Jon Austin, Daily Express, June, 2018

Wagwan is synonymous with casual greetings like What’s up? or What’s happening? A usual response to wagwan can be nagwan, or “nothing’s going on,” (i.e., not much). No matter how you say it, small talk is universal, it seems.

Wagwan can also be used grammatically within a statement rather than just a stand-alone greeting (e.g. I never know wagwan on The Bachelorette).

The expression wagwan pops up a lot in grime music, a type of electronic dance music emerging in the early 2000s in London by artists of diverse backgrounds. It’s also found a lot in reggae and hip-hop lyrics. Wagwan‘s popularity in hip-hop started in London but quickly spread around the world. 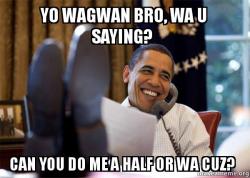 American listeners of these tunes have found wagwan confusing, mistaking it for wigwam, an Algonquian word for “dwelling.” Context, though, quickly stretches the imagination. Try interpreting wagwan as wigwam in this 2018 line from American rapper Joyner Lucas’s “Look Alive” remix: “My Jamaica bitch got socks on, every time I hit it she be like, ‘wagwan’.” 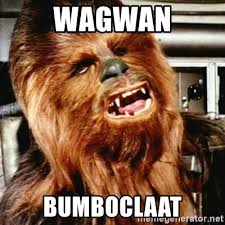 This is not meant to be a formal definition of wagwan like most terms we define on Dictionary.com, but is rather an informal word summary that hopefully touches upon the key aspects of the meaning and usage of wagwan that will help our users expand their word mastery.