What does enby mean?

In the LGBTQ community, an enby is a nonbinary person. It’s a phonetic pronunciation of NB, short for nonbinary, or people who do not identify their gender as male or female.

Where does enby come from? 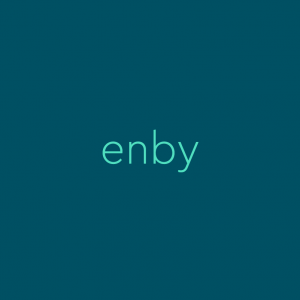 While we can see examples of nonbinary genders in Southeast Asia (hijra) and Native American cultures (two-spirit), the term nonbinary came into the Western mainstream with greater visibility and inclusion of gender diversity in the 2000s. 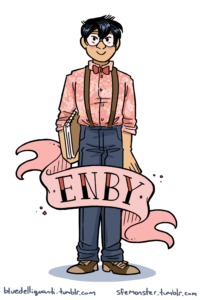 Enby itself emerges at least by 2013, when it was defined on Urban Dictionary and attributed to Tumblr, the social media platform known for its active transgender and genderqueer community and lexicon. Nonbinary was shortened to NB, which, if its letters are phonetically pronounced and then spelled out, yields enby. The idea of enby is to give nonbinary people a short-hand equivalent to their binary counterparts, e.g., (a) boy/male/man and (a) girl/female/woman.

Everyone: Happy International Women’s Day!
Me, an enby: pic.twitter.com/IqJnzgPdJF

Search interest in enby spiked in 2018, likely due to celebrities coming out or identifying as nonbinary individuals. For instance, in July 2018, actor Bex Taylor-Klaus of TV show The Killing fame tweeted they were enby.

I came out as trans non-binary in a room full of people today. Guess it’s time for me to do that on here, too …

Gender identities are often represented by a flag–sometimes with several variants than one. This is perhaps the most recognized enby flag: 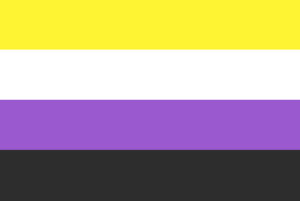 #TRANSMASCARTISTS Hey, I'm Sasha, an french enby boy, I love drawings cute characters, ans I live for shipping art, saturated colors, and detailed backgroud✨ / I love all my precious ocs 💕
@Meggukun, October 2018
Unless they’re incredibly enlightened or proactively planning, elementary school teachers are engaging in gender-segregated practices daily: “Girls line up here, boys line up there.” “I like the way the girls are working quietly. Boys, you’re getting rowdy over there.” “At lunch today, you are to sit boy/girl/boy/girl.” [...] For non-binary, or enby kids, those moments in school are constant, brutal reminders that their gender identity doesn’t matter — or worse — doesn’t exist.
Martie Sirois, Scary Mommy, July 2017
I still don't know if I'm "actually" enby as a demigirl or if simply trans woman just felt like..... like I didn't feel valid as such? / Yeah, yeah, I know, of course I am. / but that's why I'm questioning my id right now a little bit, gotta sleep over it >.<
@mololabo, November 2018
SEE MORE EXAMPLES

Enby can be a noun, e.g., “They’re an enby,” or modifier, “They’re an enby person.” The term is primarily used by people who self-identify as enby, or in discussions of the LQBTQ community generally, especially on topics of more inclusive language in the popular and public lexicon. (E.g., not defaulting to terms like boys and girls in school.)

I’m definitely some sort of girl-adjacent enby tho tbh

More than being a much-deserved shorthand for the longer nonbinary or nonbinary person, the term enby also has a more conversational and lexical naturalness to it, while the abbreviation NB can stand out. 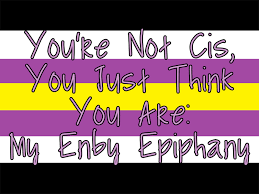 Less interestingly, enby is also a very common typo for envy, given that the V and B key are right next to each other on the QWERTY keyboard.

This is not meant to be a formal definition of enby like most terms we define on Dictionary.com, but is rather an informal word summary that hopefully touches upon the key aspects of the meaning and usage of enby that will help our users expand their word mastery.