What does shoot the shit mean?

Hey, wassup? Nothing much? Cool, cool. When you’re just chilling and chatting with your friends, you’re shooting the shit.

Where does shoot the shit come from? 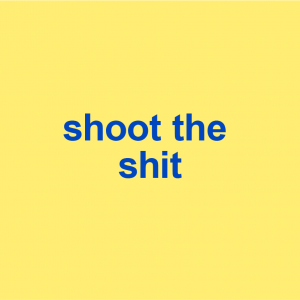 Shoot the shit appears to be a variation of shoot the breeze. Both of these expressions mean “to chat idly just to pass the time.” A form of shoot the breeze is recorded in a poem written during World War I by a US private, who described his corporals as sociable men who were much better at “breeze-shooting” than fighting or doing actual work. It doesn’t require much skill or effort to hit the wind with a gun, so the expression goes.

Shoot the shit emerges in the 1940s, notably found in a letter by the author Norman Mailer. The shit, here, may be a more intensive and alliterative substitute for breeze, with shit meaning “stuff,” i.e., any old topic. Ever the shit-talker, the character Holden Caulfield used a milder take on the expression, shoot the crap, in J.D. Salinger’s 1951 The Catcher in the Rye.

Examples of shoot the shit

I love the customer that come in and drop the f bomb with in minutes so I know theyre chill and we can shoot the shit
@KaylaRippon321, August 24, 2018
Cookies and Marni. That's the agenda today as Tyler, the Creator, and I ride around Paris and shoot the shit.
Mark Anthony Green, GQ, August 6, 2018
I wonder how many of my friends are struggling but just keep it inside because they dont want to burden others with problems. I am guilty of this. So if I reach out and just want to shoot the shit, shoot that shit back with me! Especially during times like this its ez to struggle
@Cord_Garcia_, August 6, 2020
SEE MORE EXAMPLES

Who uses shoot the shit?

Shoot the shit is an informal expression to characterize casual, friendly hangouts or encounters. Got one hour to kill before your flight takes off? Perhaps you’ll shoot the shit with your traveling companion and have some pleasant but free-flowing and engaging small talk. Sitting around the bar on a Tuesday after work? Maybe you’ll just shoot the shit about sports and not-too-deep news with a seat mate. The other end of the spectrum is when your boss or partner demands some real talk, a come to Jesus, with you. In that case, you might be in deep shit.

Dave and I is goin to the Denny's to shoot the shit and drink endless hot cocoa. Mmmm hot cocoa…

Queen Latifah would be an interesting person to have a few drinks with one day. I can't picture what she'd be like to shoot the shit with.

This is not meant to be a formal definition of shoot the shit like most terms we define on Dictionary.com, but is rather an informal word summary that hopefully touches upon the key aspects of the meaning and usage of shoot the shit that will help our users expand their word mastery.