Previous Vocab Activities To Prepare For High School Next What's the Difference Between "Sushi" vs. "Sashimi"?

It’s time to vote on round four of our slang competition at Dictionary.com!

There are only a handful of words left on Dictionary.com’s March Madness bracket, but the competition is just heating up. Last week, you voted on our Sweet Sixteen, and you wasted no time knocking out terms like big mood, hold my beer, and sorry not sorry.  In a surprising upset, the 16-seed basic defeated the 4-seed chonky by 26 votes. Meanwhile, low-key won a decisive victory over woke by over 330 votes.

This week, we’re asking you to vote on Dictionary.com’s Elite Eight! As a reminder, your job is to choose your favorite word in each pairing in the poll below. 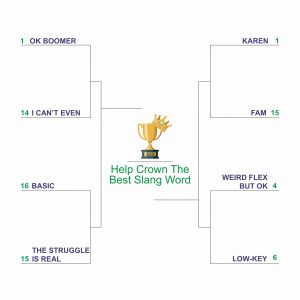 Previous Vocab Activities To Prepare For High School Next What's the Difference Between "Sushi" vs. "Sashimi"?
RELATED POSTS