Feedback
Previous What's It Called When You Can "Taste" A Word Or "See" A Sound? Next Don't Get Tripped Up By These Ten Tricky Homophones 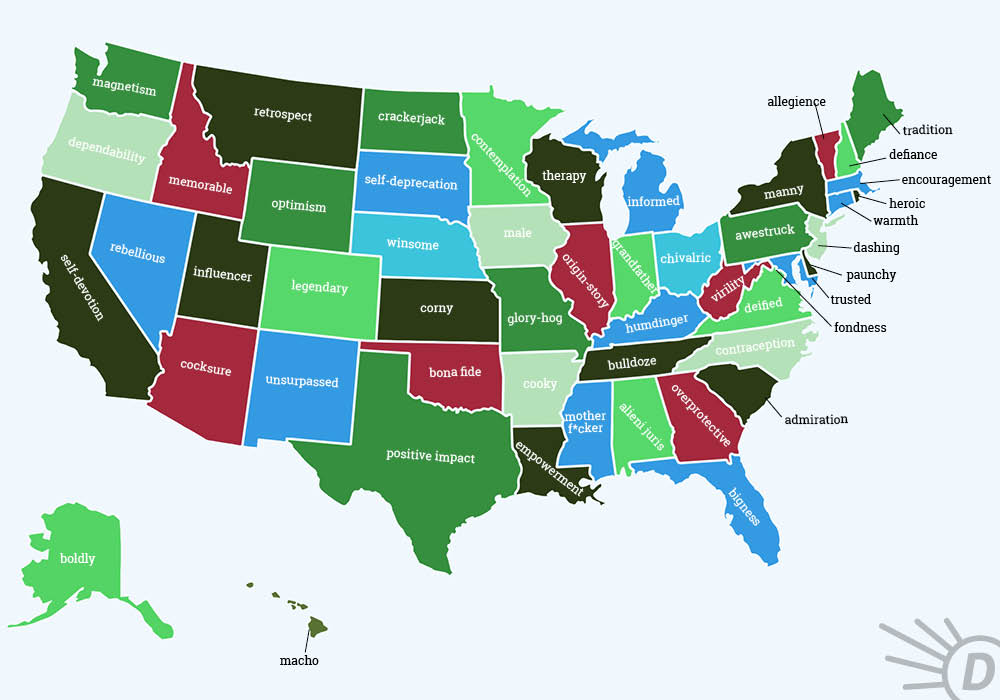 Paunchy, winsome, defiance, thaumaturgical. What could this unusual assortment of words possibly have in common? Dads, apparently.

Our Data Scientists examined what users looked up on Dictionary.com on Mother’s Day in 2018. Well, Daddy-o, they’ve worked their magic again.

Here are the search terms that trended in each state for Father’s Day, 2018. And, compared to our moms, the words tell a very different tale.

(A quick note: Several words trend in each state. For our word map, we’ve highlighted just one of them, though we may mention others in our article.)

One of the most salient themes in our Father’s Day data is that there aren’t any obvious patterns.

For example, across eight states on Mother’s Day 2018, variations on the word selfless trended, but in no two states did searches for the exact same term spike on Father’s Day 2018. Several made for effective matches, however: helpful and helped (Maine and Wyoming, respectively); defiance and defiant (New Hampshire/New Mexico); and appeased and appeasement (Massachusetts/New Hampshire). Mothering trended in seven states in our Mother’s Day data along with other mother words (e.g., ma’am, matriarch). But, its counterpart, fathering, is absent in our Father’s Day figures. In fact, the most paternal term represented is grandfather, which trended in Indiana.

New Yorkers did look up manny, an occasional slang blend for a “male nanny,” while DC denizens were researching fosterer, or “someone who fosters” (raises a foster child).

If we are to identify any words that form a subset, they’re adverbs. Alaskans boosted boldly. Washington, DC went all out with wholeheartedly. In Washington State, cleverly and sagely(“wisely”) surged while Ohioans were concerned with the more forceful sternly (“strictly, harshly”).

These adverbs are also noteworthy because they point to a wide array of attributes—at least as suggested by these top lookups on Dictionary.com—that people may have been thinking about in relation to their fathers or father figures on the holiday.

Of the over 150 terms that topped lookups across the US, we’ve categorized around 40% them as corresponding to a positive quality.

A great many lookups on Mother’s Day 2018 sing praises, but they appear to figure the mother as caretaker (e.g., above and beyond, unconditional, nurturing, and selflessness). Only a handful of Father’s Day search terms express a similar sense of giving and care:

Many other admirable words trended, but these traits might imply we esteem our mothers and fathers based on different characteristics, even different standards? Here are some more highlights from Father’s Day 2018:

Not so for dads. Many searches convey issues dealing with id and ego:

Elsewhere in the data are invasion of privacy  (Kansas), reign of terror (Nevada), thought police(Nebraska), and in Alabama, the legal term alieni juris, “under the control of another,” as an infant or person suffering from an extreme mental illness.

Perhaps Wisconsinites had something in mind when they looked up therapy on Dictionary.com last Father’s Day. North Carolinians apparently had something altogether different on their minds when they sought the word … contraception.

In Arkansas, meanwhile, people had an appetite for Hershey (presumably, the chocolate) and cooky(a variant of cookie).

Of dad bods and dad jokes

Of course, we can’t conclude how people feel about their fathers based on Dictionary.com queries alone. But, if the words do form a portrait of the American dad, he’s no manly man.

But, many of the words, taken as a whole, suggest a down-to-earth dad who cracks cheesy jokes, teems with trivia, pursues quirky hobbies, and can’t dance for the life of him:

Our dads certainly can impart a life lesson or two, a term Missouri was so searching. And on their honorary day, our leading lookups have certainly provided quite the vocabulary lesson, to Coloradans were getting a grip on eleemosynary (“charitable”). In Illinois, in contrast, keyboards were jamming out with trustafarian, or “a wealthy person partying away their days.”

Folks down in the Bayou State pushed ahead with Sisyphean (“endless labor”). Searchers in Montana, Big Sky Country, went big with omnipotent (“all powerful”), an apt description for a fascinating word that trended in New York: Dagda, which is “a powerful, gigantic, fatherlike god of strength and wisdom in Irish mythology.”

And, in Massachusetts, our word-curious users impressively pulled thaumaturgical out of their hat. It refers to something related to “the working of wonders or miracles; magic.”

Words—just like so many of our dads—give us so much to be jubilant (West Virginia) about. Happy Father’s Day!

Previous What's It Called When You Can "Taste" A Word Or "See" A Sound? Next Don't Get Tripped Up By These Ten Tricky Homophones
RELATED POSTS

Home / Pop Culture / Holidays / What Word Is Your State Looking Up On Father’s Day?