Since 2007, hashtags (#) have been used on social media to bring together people or ideas posting about a similar topic. Sometimes, hashtags are created to draw attention to something, whether it’s a movie (#BirdBox) or a movement (#MeToo). Other times, hashtags seem to come out of nowhere in the zeitgeist (like #womp). They’ve even spread into the way people talk (“hashtag blessed!”).

But, sometimes, it’s hard to keep track of all these hashtags and what they mean. So, we’ve rounded up some of our favorite hashtags from the past couple years to help you navigate the social media weeds. #amazeballs

WATCH: #MeToo And Other Hashtags That Inspired A Movement

If the world won’t give you the emoji you want, make your own. That’s the idea behind the 2018 hashtag movement #ClawsOutForTrans.

In 2018, the Emoji dictionary version 11.0 was released. Much to the disappointment of trans people who had been lobbying for the pink-and-blue trans flag to be included in the update … it wasn’t. But for whatever reason, a lobster emoji was included. Trans people adopted the lobster as their de facto flag emoji and raised awareness of the issue of trans visibility with the accompanying #ClawsOutForTrans. 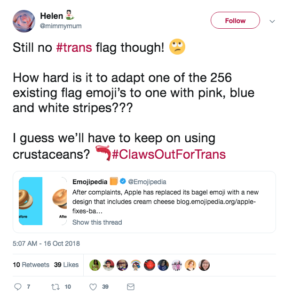 Why the lobster, you ask? The lobster is a gynandromorph, an organism that contains both male and female characteristics.

It may sound like a Canadian person saying “out,” but OOTD is actually an acronym that stands for “Outfit of the Day.”#ootd is used to tag pictures of a particularly fashionable outfit on a particular day, which started in the context of fashion blogging but has now expanded to everyone.#ootd posts often include details about outfits, such as where the person purchased the pieces in question and what brand they are. Sometimes, #ootd notes prices and ways to replicate the look or how to find similar pieces. Casual Insta posters might tag a photo with #ootd because they feel proud and happy with the way they look that day … and that’s perfectly within the hashtag rules! 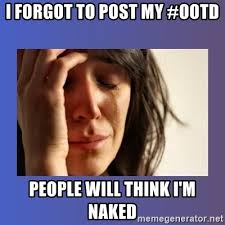 We all get crushes on people we admire, whether for their looks, their sense of humor, or the fact that they share our passion for putting ketchup on mac & cheese … don’t judge.#ManCrushMonday, or #MCM, is a trend dedicated to people sharing the deets on their favorite dudes. #MCM first emerged on Twitter in 2009. When Instagram added hashtags in 2011, #ManCrushMonday was one of the many that users adopted. Early on, the phrase was mostly used by men tweeting about the men that they admire, or have a man crush on. And in case you weren’t entirely sure … a man crush generally describes a strong feeling of admiration and is generally regarded as being non-romantic and nonsexual.

The term began to gain popularity in 2013, according to Google Trends, at the same time as its sister phrase, #WomanCrushWednesday, picked up steam. Today, #MCM is used by both men and women.

K-pop broke into the American mainstream in 2012 with the song “Gangnam Style” by Psy. People went nuts for the catchy tune and outrageous dance. As of 2018, “Gangnam Style” was the most-watched YouTube video of all time.

In August 2018, another K-pop song and video went viral, “Idol” by the massively popular group BTS. The song was paired with an impressive dance routine, and within 24 hours, it earned more than 45 million views. The video and its easily replicated dance sparked the #IdolChallenge where participants post videos of themselves recreating the choreography.

The challenge really took off when on August 27, 2018 when J-Hope, a member of BTS, posted a video of himself on the social app Tik Tok complete with the “#IDOLCHALLENGE” hashtag.

There’s nothing better than old friends you know you can trust. At least, that’s what artist Drake thinks based on his motto/song-turned-hashtag “No New Friends.”

The expression was popularized by Drake on DJ Khaled’s song “No New Friends.” The song was released on April 19, 2013 and it peaked at #37 on the US Billboard Hot 100. In the hook of the song, Drake raps: “No new friends / Still here with my day-one n!ggas,” or his boys that have been there for him since the start.

After the song’s release, the expression took off across the internet. It also spawned a related hashtag, #NoNewFriends, that people used for sharing their own feeling of solidarity with their existing homies—and their lack of interest in making new ones.

#womp is a great onomatopoeic hashtag—it represents the sad horn sound associated with somewhat comedic fails (think womp, womp). It’s used to tag something slightly negative or awkward … like trying to pay for something with a library card instead of a credit card or losing a football game because of an interception, #womp. 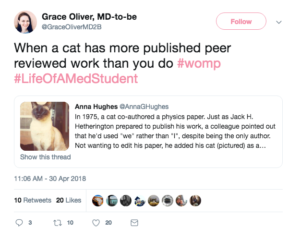 #womp can also be related to heathy eating. On some social media, WOMP is an acronym that means “world on my plate.” It’s a way for people to boast about their eating habits by tagging their meals. You know we all love posting our food pics on social media, we just can’t stop.

To do something like a boss is to do it with stylish confidence or authority. This can be applied, tongue in cheek, even to fairly mundane tasks.

And so, the hashtag #likeaboss was created. It began to appear on Twitter in February 2009, following the release of Incredibad, a comedy album by Andy Samberg with the popular track “Like A Boss.” It was (and still is) used to brag and to celebrate small victories. #likeaboss is also used as an image caption in memes, especially on pictures of people or characters acting confident, like a dog reclining in an office chair or Disney’s Pinocchio smoking a cigar. 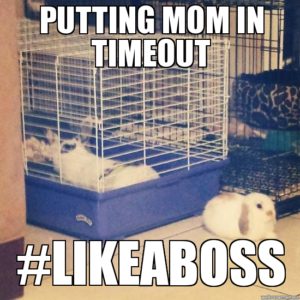 FML is an acronym meaning “f*ck my life,” usually said at the conclusion of a negative story. It acts as a punchline to the “joke” which is really just the story’s tragedy. This is a key component, as even though fml’s meaning is negative, it is usually used in a humorous context. 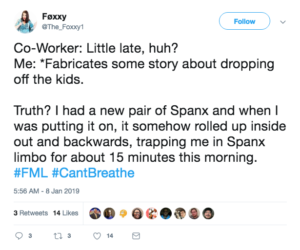 In contrast to #FML is #LML—”love my life.” It’s intended to appreciate an everyday moment of joy (e.g., unexpectedly receiving flowers on one’s first day at a new job). This LML, however, can also be used ironically or sarcastically, resembling FML in tone.

Finally, there’s #HML. HML for “hate my life” originates on the internet in the 2000s as a negative counterpart to LML and a milder variant of FML. On social media, HML is often issued in response to an everyday setback (e.g., “Locked my keys in my car again #HML”). While it can be used as an earnest expression of frustration, HML can also have an air of self-deprecation, particularly when marking something that is inconvenient … but not the end of the world.

Ball is life is a phrase used by basketball devotees to show their passion for the sport of basketball.

People who say ball is life or use the hashtag #BallIsLife—sometimes called ballislifers—are extremely devoted to the sport of basketball. Ball is life doesn’t just signify being a fan of the game; it represents someone who loves and lives for the game, plays as much as they can, thinks about it when they can’t play, and finds meaning in their life through basketball. Given the fervor of ballislifers, some have joked the expression is inspired by religious texts. Amen. 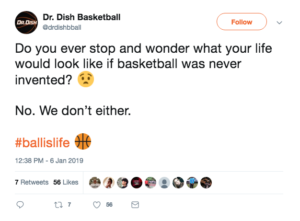 Wepa is a Latin-American Spanish expression that is roughly equivalent to the English “Oh, yeah!”, “Wow!”, or “That’s awesome!”

Raising wepa’s profile online, the hashtag #WepaWednesday emerged in 2009 as a positive alternative to the English hump day by making it an occasion to find joy—Wepa!—in the middle of the week vs. complaining that the workweek is only half over. Many Latinx peoples embraced the hashtag as an opportunity to celebrate all things Latin. 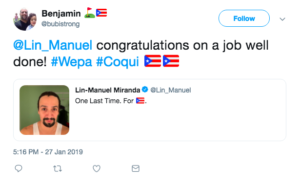 In general, the exclamation is variously used to express amazement or great happiness, often in reaction to good news. It’s particularly popular at events where people are singing or dancing, encouraging high energy, movement, and partying. Internet users tag social-media posts with #wepa to express the sentiment, as well.

President Trump isn’t the first politico to have a hashtag (#MAGA). President Obama had one too, although his was born out of sarcasm.

Thanks, Obama is a meme in which the 44th president of the United States is blamed, often humorously, for various misfortunes.

The hashtag #thanksobama was first used in 2009, in response to the proposal of a value-added tax. In the following years, the hashtag was, again, used both sincerely by Obama’s supporters and sarcastically by his detractors. Even after Obama left office in 2016, the phrase and the hashtag #thanksobama have seen continued use in the press and on social media as an automatic, humorous issuing of blame, especially for ridiculously minor incidents or situations Obama could never have control over.

Black Girl Magic and #blackgirlmagic were created to celebrate the accomplishments and general amazingness of black women. It is used as an expression of positivity and empowerment.#blackgirlmagic dates to 2011 on Twitter, though it might have appeared earlier elsewhere. One writer in Teen Vogue calls #blackgirlmagic a movement. This term was used a lot in 2016, especially following Essence’s announcement in January that their February issue would celebrate #blackgirlmagic.

Both the phrase and hashtag have their fans and critics. Fans of it revel in the opportunity to recognize black women they appreciate with a catchy expression and social-media friendly hashtag. Critics take issue with the fact that this phrase attributes admirable qualities of black women to the supernatural. 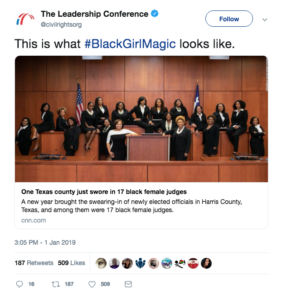 Word of the day
alluvion
alluvion

Home / Slideshows / Hashtags To Help You Get By On Social Media